National Security, #IWasWrong, And The Incestuous Nature Of The National Guard

Days before I deployed in support of OIF, a first sergeant in my battalion (not my company) slipped $40 down … Continued 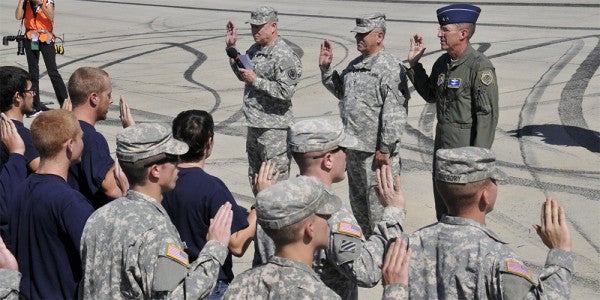 Days before I deployed in support of OIF, a first sergeant in my battalion (not my company) slipped $40 down my front pocket of my blue jeans and whispered in my ear to “have some fun on him.” The entire unit had been drinking at a bar off base in Yuma, Arizona. His breath smelled of cheap beer. His whisper and the look in his eyes implied that I ought to be grateful for his charity. That I might owe him something for his kindness. He slapped me on the ass as I walked away and looked entirely comfortable doing this in front of other soldiers.

It was 2006. We were an Air Assault Black Hawk battalion providing supplemental support for the Marine Corps. We were a National Guard unit. I was a sergeant. When I walked away from him in disgust, he tried to follow me into a bathroom. A private first class saved me from something that might have turned horrible — an awkward altercation at best and, at worst, a sexual assault.

I didn’t report it. Neither did the private first class. We talked about it, and we both knew that this would not have ended well. Because, unlike active duty, NG units are built within regional communities, and soldiers work side-by-side for years. The protections afforded in such an incestuous system mean that a man with a history of alcoholism and domestic abuse can move his way through the ranks. Folks might whisper; they know and they “don’t know” simultaneously. They exchange looks. But they also handle business in house. “Don’t ask, don’t tell” takes on an entirely new meaning once you encounter sexual aggression while serving in the National Guard.

The Government Accountability Office reported to Congress in February 2017 that, of the 550,000 members of the Guard and Reserve, only 604 reported sexual assault incidents in the fiscal year of 2015. They also addressed that the low number comes from sexual assault being a underreported crime. Of these 604 incidents, 79 were investigated by the Office of Complex Administrative Investigations. Of these 79 cases, 3 investigations took longer than 9 months to conclude. The attrition rate from the moment a soldier experiences an unwanted sexual encounter to the conclusion of an investigation that ends with survivors finding justice is, quite frankly, atrocious.

What the report does not consider, what it ought to highlight and yet glosses over entirely, is the informal “Good Ole Boy” network that drives a state-run fighting force and protects people like the 1SG who got away with sticking his hand down my front pocket. The report ignores the close-knit communities that develop within Guard units where protection of long-term friendships comes at the cost of unit security and soldier safety.

Recently, Twitter account @iAmTheWarax started a conversation using the hashtag #IWasWrong, and I started thinking about my own role as a former NCO in the military. I served both in active duty and in the national guard. I’d like to bring attention to what toxic masculinity and the tacit acceptance of rape culture does to a guard unit, especially once they are activated and expected to take part in combat support missions.

That this first sergeant saw fit to put his hand down the front pocket of my pants, in public no less, without fear of consequence is telling. That he did so to a junior NCO days before we flew into a combat zone is downright terrifying. When women soldiers are expected to maintain situational awareness of enemy actions and situational awareness in day-to-day workplace interactions with your own comrades it takes a toll on the body, mind, and soul. No woman should fear for her own safety when surrounded by her own unit, behind the wire. No man should, either.

Speaking of men, let’s go back to the PFC who saved me and what that does to him, me, and the dirtbag who initiated this whole incident. When a male PFC has to intervene between a female SGT and a predatory 1SG, rank structure is undermined, and our unit mission is compromised before it’s even begun. I am so grateful to this young man for saving me. He should never have had to, though, and he knew as much as I did that we had no path for recourse afterwards.

And so nothing happened to the 1SG. We deployed. I watched his movements anytime he was near me. I kept his secret. He came home, finished out his time free of consequence, and now enjoys a retirement and a lifelong pension.

I got out. Three months after our return, I was warned of a possible re-deployment and could not handle it. I refused promotion and bided my time until my release date. But part of me also knows that #IWasWrong because I contributed to this incestuous proclivity towards secret-keeping. I won’t do that anymore.

Kate Dahlstrand enlisted into active duty in 1998 and transitioned into the Virginia National Guard in 2003, where she worked as a combat medic. She deployed in support of Operation Iraqi Freedom with her Guard unit from October 2005 through February 2007. She is currently a PhD candidate in the history department at the University of Georgia. She studies Civil War veterans and their transition back to civilian life.