The Navy Charges: Is Accountability Found In A Trial? I Fear Not, And Here’s Why

The Navy announced last week it will convene Article 32 hearings, the first step toward courts-martial, for five service members … Continued 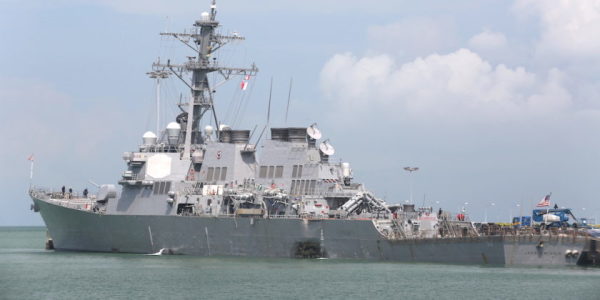 The Navy announced last week it will convene Article 32 hearings, the first step toward courts-martial, for five service members — including both commanding officers — responsible for the collisions of USS Fitzgerald and USS John S. McCain.

The Navy intends to pursue charges of dereliction of duty, hazarding a vessel, and in an unexpected twist that has the generated much debate, negligent homicide.

Two arguments have broken out about this action.

The first about is the unusual nature of the negligent homicide charge and the decision to pursue court martial rather than non-judicial punishment. Dan Lamothe and Capt. Michael Junge have ably described the precedents of holding commanding officers accountable for their professional mistakes, and it does not point to an easy path ahead for the prosecution.

The second area of debate is whether or not the unusual charge of negligent homicide is the right way to demonstrate to the public that the Navy is serious in its pursuit of accountability.

The obvious question that I think those excited about the prospect of publicly court-martialing naval commanders for their professional failings miss is what does the Navy’s message of accountability become, if past becomes prologue, and these officers are acquitted? Would an acquittal send a message of the Navy’s commitment to accountability, or would it leave the impression that no one was being held accountable for the deaths of 17 sailors and the temporary loss of two of the Navy’s most capable warships?

Non-judicial punishment in these cases is a far better avenue to demonstrate the Navy’s commitment to holding commanding officers accountable. Non-judicial punishment, in this case an Admiral’s Mast, is a disciplinary hearing where the military rules of evidence do not apply, the lowest standard of proof must be met, and a commander decides guilt and punishment. I think one would be hard-pressed to find anyone who thinks these officers would not be found guilty of dereliction of duty and hazarding their vessels at Admiral’s Mast, based on the information already released to the public.

In contrast, a court-martial is a criminal proceeding where the rules of evidence apply, the highest standard of proof must be met, and the members, similar to a jury, decide guilt or innocence. The accused are represented by attorneys at court-martial, who must present a vigorous defense of their clients — likely to include every effort to shift the blame for the collisions to decades of bad decisions by dozens of senior naval officers that have led to chronic under-manning and poor readiness conditions under which these ships were permitted, if not required, to operate. But the members will not have these senior officers to hold accountable, only the few who happened to be left standing when the music stopped. Would even an unlikely conviction result in a belief that the Navy is committed to accountability after this spectacle? I think not. The path the Navy has chosen will most likely result in tarnishing the service’s reputation for accountability rather than burnishing it.