Remember when Michael Jordan tried his hand at professional baseball? I recalled that image when I read an article in... 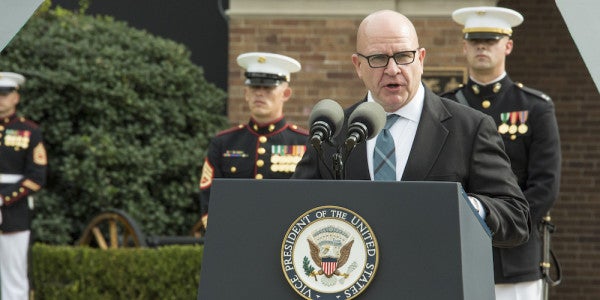 Remember when Michael Jordan tried his hand at professional baseball? I recalled that image when I read an article in the “New York Review of Books” assessing the performance of Army Lt. Gen. H.R. McMaster as President Trump’s national security advisor. Everyone is saying today that McMaster's days are numbered, in the single digits.

I mean, the “NYRoB” is your go-to periodical if you want to get the latest academic word on T.S. Eliot, or to see whether it is time to short Sylvia Plath’s stock. But it is not where I would go to understand the U.S. military today.

Here’s the part that really got me. Veteran Long Marchers may recall that I was pretty pro-Obama, albeit with some qualms about his foreign policy. But this paragraph makes me gag:

Obama’s NSC, which essentially laid out the foreign policy agenda for the State and Defense Departments to implement, opened the White House to occasionally justified charges of micromanagement and control-freakery. But the larger reality was that international affairs had become too complex and the news cycle too fast to allow US foreign policy to proceed without centralized, top-down supervision. The merits of this approach were manifest in a number of accomplishments and initiatives, including the killing of Osama bin Laden, the strategic rebalancing toward Asia, and, perhaps most notably, the negotiation of the Iran nuclear deal.

That sounds like Ben Rhodes wrote it. But that arrogant young fellow probably didn’t, because then it would have mentioned how he liberated Burma. (How’s thatworkingout, btw?)

Were I to re-write that paragraph, I would have mentioned the Obama White House’s persistent ignorance of how the military works (and how the law and chain of command work). I probably would have thrown in, as an example, the mishandling of General Mattis when he was at Central Command. I also would have mentioned the Iran nuclear deal, but balanced it by mentioning that President Obama set a “red line” in Syria in the summer of 2012 and then failed to enforce it. I’d add that since Obama left office, we appear to have lost a general war in the Middle East that has been won by Russia, Syria and, most of all, Iran. I might have also said that the Obama Administration took its eye off the ball in Iraq. (And yes, I write all that as someone who voted for Obama twice.)

And I might have said that Obama should have dealt more seriously with torture committed by and for CIA officials. He didn’t want a fight with the intelligence community. But sometimes you just have to do your job, because you need to establish the historical record so future presidents don’t appoint to high positions people who violated American law.

But the author of the NYROB article, one Jonathan Stevenson, was of course part of all that. He was “Director for Political-Military Affairs, Middle East and North Africa, at the National Security Council from 2011 to 2013.”