A Defense Of The Police, From A Marine Veteran Turned Cop 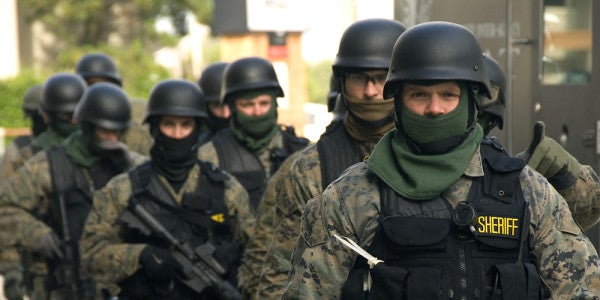 We as the police aren't getting our narrative out and it’s creating a divide between us and the people we are sworn to serve. Rather than run to our respective corners, we need to have open and honest dialogue, one free from overused buzzwords and cliché stereotypes. What we need is a good, old-fashioned whiskey locker discussion and it needs to happen soon and often.

As a police officer, do I think some veterans dislike us? I don't think the disdain for my chosen profession is specific to only that subset of American society. I feel like I could write a novel on my theories as to why this is, but with limited space for this article, I must keep my response within my left and right lateral limits. I’m here to inform you that we are not attempting to become SEAL TEAM 7 out here and that the comparison between police and military is like comparing a rake to a shovel—that is, both are tools with similar handles, but the head is in a completely different place and used for different tasks.

As a veteran of the Marine Corps (0311), I feel I can speak to this topic with some confidence. “Militarization” of police, if you chose to use that vernacular, really occurred after the North Hollywood shootout. We, to this day, are still outgunned. Couple that with my department’s proximity to our nation's capitol, the rise of mass shootings and ambush style attacks—well, I need a platform and gear that will take me from cannon fodder to at least a chance at survival so I can take out the threat(s). Side note: the M4 and ammo load we carry allows us to be more accurate, able to stand off further to assess and engage at a time of our choosing. It also has less chance of passing through targets, walls, etc. than, say, the 870 shotgun some carry.

As far as body armor and surplus helmets go, both have proven their mettle in my career thus far. My helmet saved some of my brain cells from the bricks, rocks and exploding propane canisters near the CVS at North and Penn in Baltimore on April 27th, 2015. I can tell you that a helmet may have helped the officer who was pulled from his patrol car at Mondawmin Mall and pummeled about the head with bricks. I purchased a rifle-rated vest, with my own money, after a local trap house was shot up with a few hundred rounds of 7.62.

The argument I take most issue with in both articles is that of training and tactics. I’m a former infantry squad leader in the Marines, an Operations Captain of a federally contracted armed security force of a rather important government headquarters, and I’m now a LEO who was involved in an ambush style attack with just six weeks on the job. (A female Marine was shot and killed by an Army Sergeant responding to a domestic on her first day not far from my AO–I still carry her photo in my patrol car from her funeral that I attended.) The ONLY overlap between the three armed jobs I’ve had is that in all three, I carry a weapon.

Being overseas was easy compared to being on the beat. When you left the confines of the wire you went Condition 1, because the sign reminded you to, and it became black and white, kill or be killed. (ROE was never really restrictive and, at times, barely existed.) Here, on American soil, I have to carry Condition 0, on and off duty, at the mall, with my kids because of a shooting that happened there a few years back or the possibility of bumping into a guy with whom I just ruined his life because he knows once his case goes to court he's going to get his eight years back up time or X, Y and the third. (My current ROE is my departmental directives, the US Constitution, CNN, Fox News, YouTube, Facebook, Twitter, etc.) Every traffic stop could be a soccer mom or a crazed sovereign citizen or car jacker with an AK . It could be overwatch of a “peaceful protest” with a veteran suited up in body armor and an AR. (Justice Bedsworth does a great speech on the dichotomy of today’s patrol officer.)

There have been times where I have divulged my service history to people I am interacting with. With some, their shoulders will droop as they begin to see that there is commonality between after all, that I am not just a badge with a mouth. I always viewed my job as a professional hide and seek league. I don’t take it personally when people lie to save their own skin. (And that’s roughly 95% of the time, from “no officer, I didn't run that stop sign right in front of you” to “that’s not my voice on the recording selling heroin to that dead guy.”)

That said, a lot of negative interactions I have had with Vets have come when I tell them about my service after I catch them embellishing their service in an attempt to get out of whatever predicament has placed them in my presence. I once talked a guy back from his supposed Army Special Forces with eight tours in OEF and OIF story down to the truth of being an Air Force dental tech who got kicked out for substance abuse.

It’s difficult to say which is more frequent–negative or positive interactions–because I normally play my service experience close to the vest. I bring it out only when I think it will be advantageous to the situation unfolding in front of me. I don't wear a large EGA on my vest, so the conversation never goes there unless I want it to. The ones that hit the hardest are when I divulge what I view to be the most honorable and transformative years of my life to a fellow vet, only to be viewed as a turncoat of some kind.

I know my profession is not without sin. There are people wearing a badge right now that shouldn’t. No one on Earth despises those guys more than me. Bad cops make my job a lot harder and, quite frankly, could get me killed–the guy who attempted to kill me was angry at police as stated in the numerous documents he had in his room. Never have you heard an officer say he took the job for the money, great schedule and the benefits, so I contend we have the highest majority of people doing it for the right reasons in comparison to other professions. We do it because, to quote Jacob Schick over at 22Kill, you (and your family) matter.

But, out of all the scrutiny I have received since choosing this path, this one, from my brothers and sisters, chinks my armor the most.

“J. Aspis” is the pseudonym of a police officer serving in the area of Washington DC. He has earned the Medal of Valor for both his Department and the Chamber of Commerce as well as other awards during his seven years of law enforcement service. He holds a BA from the University of Maryland College Park in Government and Politics. He served as a United States Marine from ’02 to ’06. He has chosen to employ a pseudonym because of sensitive investigations in which he currently is involved.