The View From Afghanistan: The Dark Stain Of American Gun Exceptionalism 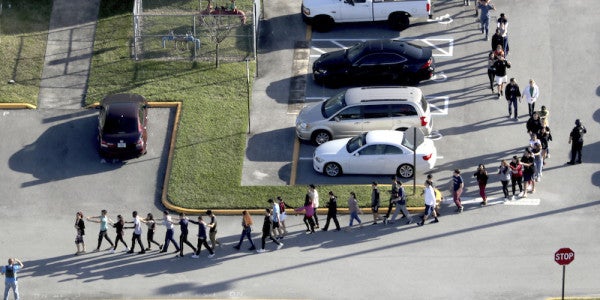 During my current deployment, nearly 100 people have been slaughtered in the United States, many of them children, a number more befitting a war zone than an ostensibly advanced society. I have good reason to fear more for my daughter’s safety in her daycare than my own safety in Afghanistan.

The headlines have been especially uncomfortable since I’m one of only a few Americans in a diverse international office. As the media coverage of Las Vegas, Sutherland Springs, the Newtown anniversary, and now Parkland has unfolded, I have repeatedly been asked why these shootings happen and if they might ever be stopped. My response is shame and, often, defeat. I see their thoughts in their expressions: Americans sacrifice our children to our guns. Newtown wasn’t enough.

What possible treatment is there? Each additional blow unleashes hideous new symptoms of conspiracy theorizing and ideological retrenchment. We are damned by our condition, certainly morally and possibly existentially. The causal factor is written into our national DNA, in what may yet prove to be a fatal congenital condition. I have to resist telling my colleagues to understand the shootings as symptoms of a degenerative disease, exceptionalism’s darkest strain, one of our last remaining values on display to the world.

‘Luke’ is an Air Force officer currently on his seventh deployment.