The Best Laid Plans: How The Current International Order Can Handle Trump

Jake Sullivan, a lawyer and adviser to Hillary Clinton, has written a provocative article, “The World After Trump: How the... 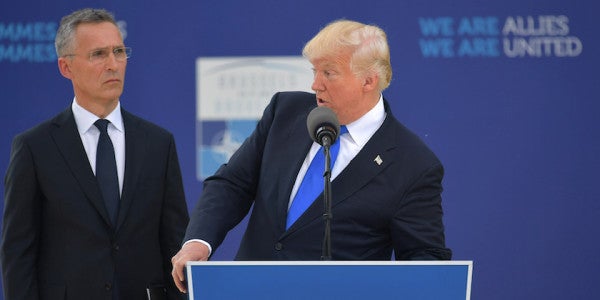 Jake Sullivan, a lawyer and adviser to Hillary Clinton, has written a provocative article, “The World After Trump: How the System Can Survive.” He makes some good points about where the country and the world may be heading but raises several questions. Sullivan has the reputation of a realist and has recently taken the lead of a foreign policy shadow cabinet. His thinking merits close attention.

Sullivan served as director of policy planning under Clinton in the State Department, and the article resembles a planning document. It assesses the changes the Trump administration has brought to U.S. foreign policy; asks what the likely effects may be; examines some of the realities underlying both the changes and the effects; and then suggests that neither changes nor effects will be as dramatic or as radical as some may want, or as others may fear.

To summarize, the “system,” which Sullivan defines as the liberal international order, can endure, but only if its supporters pull up their socks and prepare for the future.

But on deeper examination, however, Sullivan’s plea appears to be less of a contingency plan than a suggestive, even therapeutic, “call to action” in order to mollify or inspire what remains of the centrist foreign policy establishment. He may well be right, and the “system” may be more attractive or more durable than it now appears. But what if he is wrong?

Related: Trump Shocked His Natsec Staff By Reading The Wrong Speech At NATO »

Of course, it is too early to tell one way or the other. Yet Sullivan writes as a policy planner, not as a soothsayer. His case for an enduring system is based on at least seven assumptions:

On the whole, his case is a nice illustration of the “challenge-response” theory of history once made popular by Arnold Toynbee. Most systemic challenges evoke a response, often an adaptive one, as Sullivan states. If the adaptation fails, the system dies or is overturned. It is safe to assume, then, that Sullivan seeks the former, not the latter.

The problem is that he suggests little in the way of real adaptation. Rather, he asserts that the system will endure because it is inherently valuable and because enough people still believe in it. Yet, his first two assumptions are possibly in mutual contradiction; number 5 also may contradict numbers 1 through 4, as well as number 7; and number 6 is a non sequitur.

The effort to supplement a dying order, in other words, may eventually alter the nature of that order as much it might otherwise supplant it, just as the introduction of a new organism does to a garden, or a new species does to a habitat. To bring order to the new state of affairs requires as much, or even more, adaptation to it than its adaptation to a preexisting system. So it is fine to insist that “the emphasis now should be on protecting and improving the order rather than planning for the aftermath of its demise.” But a responsible planner must do both.

Those are theoretical points, of course. But they are no less important in practice. To prepare for the future means taking into account all conceivable eventualities, not merely the ones that make one feel more confident about the present and the recent past. To envision a better system of global governance than the Hobbesian one promoted by some people now in power, therefore, requires much more than a baseline assumption that international cooperation and interdependence will continue in spite of some setbacks.

Related: Trump Wants Another Country To Pay For US Forces In Syria (And It Ain’t Mexico) »

The policy planners of an earlier era who laid the foundation for the postwar order Sullivan touts did not do so. Their baseline was, for the most part, the Zero Hour. This did not mean that elements of the prewar order (or that of other periods) were not worth emulating or even resurrecting. But few people assumed that they would survive on their own, or with just a friendly boost.

The world is not (yet) at war but it has become difficult to assume that the liberal international order, such as it was by the middle of the 1990s, at least, will continue to endure in some way. It has become vital, by contrast, to prepare to survive in a different world environment—different not just politically, economically, or militarily, but technologically and culturally as well.

The policy planning staff that Sullivan once directed may not be the best place for such preparation to happen, but it would be good if it were. It was established not by a politician or lawyer, but by a former soldier, George Marshall, back in 1947. Marshall’s aim was directed at the mid-term future, that is, about three to five years ahead, wherein planners would anticipate problems and opportunities in foreign policy. Since then, the staff has taken on many other duties besides those Marshall had in mind for it. It has done as much auxiliary work for the Secretary of State—from speechwriting to bureaucratic pinch hitting—as actual planning.

One of the most useful types is scenario planning, at which the military and intelligence community are both adept, albeit more with regard to disorder than order. Not much of this type of planning, so far as I know, has taken place in the State Department of late, although the situation is not unprecedented. In fact, a different George, George Shultz, once asked his staff there if they ever think about “larger trends.” “Yes,” one of them joked, “but we try not to let it interfere with our work.”

With a new Secretary on his way to the Department, more interference may be imminent. It should start with a review of policy planning.

Kenneth Weisbrode is a writer and historian. His latest book is The Year of Indecision, 1946.