Library shelves groan under the weight of military biographies and I’ll admit that I’ve read my fair share. I recently … Continued 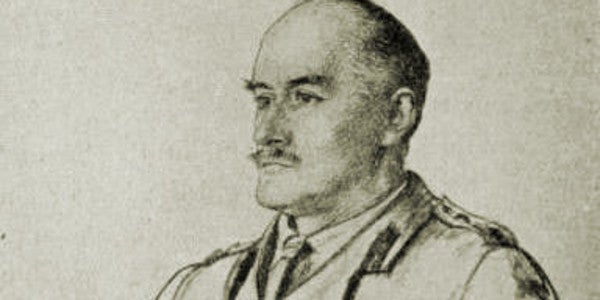 The book I read was Allenby: A Study in Greatness about British Field Marshal Edmund Allenby (of World War I fame). If you have a blank look, Allenby was the character played by Jack Hawkins in “Lawrence of Arabia.” What makes this biography interesting is that it was written by British Field Marshal Archibald Wavell (of World War II fame). These types of biographies are rare. Imagine if we had a biography of Mozart written by Hayden or a biography of Teddy Roosevelt written by Franklin Roosevelt.

Allenby was commissioned a lieutenant in 1882 and he spent most of his career in cavalry units. He was a cavalry division commander at the beginning of World War I and served on the Western Front for almost three years without achieving any particular distinction. He was then sent to command forces in the Middle East and it is there that he made his reputation. Wavell characterized Allenby unequivocally as the best British general of World War I. Unlike the “hard, pitiless pounding” that characterized combat on the Western Front, Allenby’s campaigns in Palestine and Syria were marked by imagination, energy and complete success. They rivaled campaigns such as Tannenberg and the Marne as some of the very few examples of outstanding generalship in World War I. As Wavell recounted Allenby’s career, there were two aspects that took me by surprise.

Leadership lesson 1: There is no universal set of leadership ingredients.

In his final assessment, Wavell concludes that Allenby’s greatest fault was his lack of self-control, which was characterized by explosions of temper that (literally) could cause strong men to collapse. It was not for nothing that Allenby’s nickname was “The Bull” and his subordinates were known to send secret radio messages to units to let them know that “The Bull was loose” and that they could expect heavy weather as Allenby was coming to inspect them. Reading this description of Allenby was not surprising at all. I have known senior officers who were screamers. What truly surprised me was that Wavell made a point of noting (more than half a dozen times in his biography) that Allenby passionately loved birdwatching, insects and wildflowers and was known to share this interest with friends and subordinates even during combat operations.

I mentioned this trait of Allenby’s to a retired British Army officer and asked for his thoughts. His response (in part) is worth quoting: “The soldier/aesthete has been a long tradition in the British Army… Officers are expected to be civilized – a big part of their role is to civilize an otherwise brutal mob – so interest in civilized pursuits was always encouraged.”

During my military career, I was fortunate enough to work and travel with two different Army four-star generals. Both of them were well-read, highly educated and fiercely intelligent but neither of them, to my knowledge, ever displayed an interest in botany or ornithology. In reading Wavell’s book, I was forcibly reminded of a truism of leader development — there is no universal template of great leader characteristics. We can say that great leaders achieve influence based on their character and their competence and that is true enough, but it’s pretty vague. The example of Allenby shows that organizations can have specific mental models of their leaders. One implication of this observation is that organizations need to think about and identify the type of leader that best matches their culture and values. If they fail to do so, their leader development programs will be aimless, a waste of time and money. After all, every arrow needs a target.

Leadership lesson 2: History is not always what we think it is.

The second surprise of Wavell’s book came during his assessment of Allenby’s campaign in Palestine. In it, he directly compared Allenby and T.E. Lawrence (who served under Allenby’s command from 1917 to 1918). Wavell says, “Lawrence had great courage, versatility and quickness of mind, but Allenby was unquestionably the stronger and greater character (my emphasis) of the two outstanding figures in this campaign.” He goes on to say that Lawrence always characterized his relationship with Allenby as “lion and mouse friends.”

Why is this surprising? Well, if I search Amazon.com for books about Lawrence of Arabia, I get more than four thousand results. If I search for books about General Allenby, I get nine results. Clearly, posterity has rendered a different judgment on the relative merits of Allenby and Lawrence than the one expressed by Wavell. This discrepancy should give us pause because Wavell was not some random author. By the time he was writing about Allenby, he had been a British officer for decades, fighting in the Boer War, World War I and World War II. He ended his career as a field marshal and British viceroy of India. His comments made me wonder whether today’s comparative assessment of Lawrence and Allenby has been skewed (to some degree) by the romanticism of Lawrence’s image and the hugely successful movie made about his exploits. At the very least, it should make us consider that history is not always what we think it is.

Mike Hennelly served in the U.S. Army for 21 years where he qualified as an Army Ranger and certified as an Army strategist. Later, as a civilian with a Ph.D. in strategic management, he spent seven years teaching strategy and leadership to cadets at West Point. Since retiring from West Point, he provides seminars on strategic leadership to executives of some of the world’s largest companies.