For too long now in the War on Terror, we’ve turned a blind eye to our enemies’ grievances. Either we... 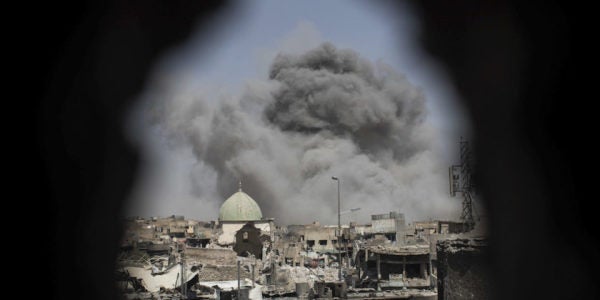 For too long now in the War on Terror, we’ve turned a blind eye to our enemies’ grievances. Either we dismiss them as unfounded or ignore them altogether. Half the problem is that we’ve taken to observing our enemies through a drone’s sight. Why it should come as a surprise to anyone that we can’t see into someone’s head from 10,000 feet up, I don’t know. Nor do I fully understand why we decided to pigeonhole our enemies as “terrorists.” Political terror is an economy of force, not an end game.

Both groups want to turn the clock back to a time when pure, orthodox Islam (read Sunnis) was ascendant and expanding. They look at all outsiders as existential threats. These two groups lashing out with seemingly random violence may not be to most Sunnis’ taste, but it shouldn’t come as a surprise that when it comes to dispossession, people on the margins often turn to violence when the group’s collective existence is at stake. Finally, in dismissing our enemies’ grievances, we miss that they may just have legitimate grievances.

Over the last three decades, Sunnis have effectively lost three traditionally Sunni capitals to their arch enemy Iran: Beirut, Baghdad, and Damascus. Throw in Trump’s recognition of Jerusalem as Israel’s capital, and that makes four. (Granted, Jerusalem wasn’t lost to Iran, but still it’s another painful reminder of Sunni dispossession.)

These losses are all the more painful because they followed a grave spiritual crisis, which came in the guise of Iran’s 1979 Islamic revolution. Khomeini’s credible claim on the Prophet’s mantle shook Sunnis to the core, leaving them with a vague and formless premonition that some sort of new Persian hegemony, with belief in its sails, was gathering force to come crush them. It was all the more earth-shattering because orthodox Sunnis eye Khomeini and the Shiite as apostates and usurpers.

It was that dark premonition that drove Saudi militants to seize the Mecca mosque in November 1979, unseat the failed and disgraced Saudi royal family, and save Islam. They failed, of course, but there’s a good argument that every subsequent militant Sunni insurrection, including 9/11, was a replay of that take-over. Osama bin Laden's intent was to overthrow the Saudi royal family and replace it with rulers capable of restoring Sunni Islam to its rightful throne. He failed too, but it did not signal the defeat of Sunni militancy.

Now with Iran’s recent machtpolitik in Iraq, Syria, Lebanon, and Yemen, Sunni premonitions about a Persian hegemony are looking a lot less vague and formless. What it means for the War on Terror is that Sunni violent jihadism isn’t about to go away. Remnants of the Islamic State will continue to fight on in Syria and Iraq, as will franchises in Afghanistan and parts of Africa. But even if the Islamic State were completely destroyed, some iteration of it will emerge. New recruits fighting under new flags will continue the jihad to halt Sunni decline. They, like the others, will count on anger and belief winning wars, not arms.

Sunni state actors also will do their part. It’s the reason why Saudi Crown Prince Muhammad bin Salman took the seemingly foolhardy risk of wading into the Yemen quagmire. He recognized that Iran possessing a client state on his southern border would represent a true existential threat to the Kingdom. And that’s not to mention Yemen would be a bridgehead to taking Mecca, a loss that would amount to the end of Al Sa’ud legitimacy and the last pretension of Sunni ascendency.

If the United States continues to dismiss our enemies’ fears, count on it that our miscalculation will continue to pile up, making things look more and more like a plague than a proper war. Forgetting that people governed by fear want to be governed by faith is a cardinal political error.

Robert Baer was a CIA case officer in the Directorate of Operations from 1976 to 1997, where he served in Middle Eastern countries, including Iraq, Lebanon, Syria, and Morocco. He is now a writer.