The major general had forged his 31-year career in the British Army by sheer will, be it through SAS selection, … Continued 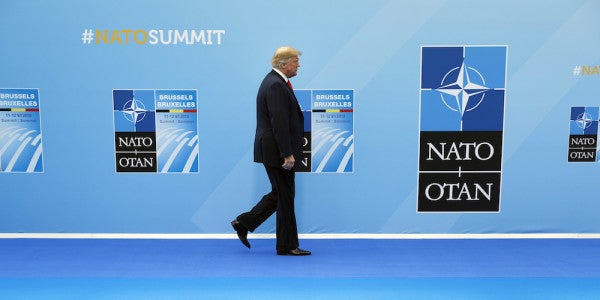 The major general had forged his 31-year career in the British Army by sheer will, be it through SAS selection, stultifying desk jobs, Iraq, Afghanistan, a PhD in Russian literature, and much more. But just getting his fork from the plate to his mouth required more strength than he’d ever had. Two peas, nested in cold mashed potatoes, perched upon the tines. The room’s sole candle cast a long shadow across the tabletop, the mobile phone flipped screen-down next to an untouched, perfectly creased paper napkin. An inch off the plate was as far as he could get. It had been 18 hours since he’d last eaten but there was just no room in his stomach for food anymore. The profound need to prevail would sustain him until this was all over.

“Sir, you have a few more minutes,” said his aide, an American Army colonel, Shane Williams. “I can see if the kitchen can make something else, have them send it back.”

Maj. Gen. Hugh Fessenden shook his sizeable head and stood up, brushing non-existent crumbs from his jeans and thick brown sweater. He clutched his phone in his bony right hand. The totem of his anxiety. He stood a head shorter than Williams, yet the American looked at him with real admiration. The Cotswold countryside English pub, the Eagle Inn, was older than the United States. In another hundred years, this would be seen as a historic place and moment. Fessenden was the man making it happen. Williams was one of the few American uniformed military advisors still working with NATO since the United States pulled all of its land forces out of Europe two years ago. He would have a front-row seat to history, which was why he had joined the military more than 20 years ago.

History indeed was being made: the first Russian test of NATO’s Article V modification since a series of Washington-led treaty modifications in 2019 surgically removed the alliance’s United States military backbone. This followed a White House ultimatum for the entire alliance to meet NATO’s 2-percent of GDP spending guideline by January 2018 or America would immediately downgrade its commitment. America remained a NATO member, but it removed all its forward-based forces from Europe and only pledged logistic, intelligence, and technical support during an Article V crisis. No direct military intervention. The tradeoff for Europe’s capitals? NATO member states no longer felt obligated to meet their GDP target on defense spending. The few who were committed to the target consisted of those nations in the Kremlin’s crosshairs: the Baltic nations, Poland, and Britain. “Less spending, more security” went the campaign tagline, but it was fueled by a reawakened peace movement on social media and by Russian information operations. Six months later, a series of vicious attacks on ethnic Russians in Kaliningrad, Lithuania, Latvia and Estonia prompted the formation of local self-protection brigades, which were in reality clandestine Russian contractors and a handful of Spetsnaz advisers, to set up heavily armed safe zones and enclaves in the region. Soon after that, Russia established a no-fly zone for non-Russian military aircraft over the Baltic states. A rapid virtual Russian takeover of telecommunications nodes in all three countries locked out opposition voices. Local efforts at armed resistance to the Russian incursions were distorted into a narrative of a NATO-led anti-Russian cleansing campaign in the Baltic region, including a series of GRU false-flag mass-casualty IED attacks in Tallinn and Vilnius blamed on MI6 operatives.

While the Asia-Pacific’s vast distances elevated denial of information to a form of strategic dominance, Europe’s population density gave information and cyber warfare its own character. Rather than planning to shut down or blind an enemy, the battle was for influence: to crank up messaging and narrative combat through alternative nodes and networks. A population’s confidence in their governments, and in their own future, ebbed and flowed accordingly.

Directed to come up with a military plan, as chief of staff, Fessenden immediately moved most of his senior leaders off base while leaving a skeleton crew behind to maintain an electronic presence that indicated they were struggling to come up with a response. Those staying back included the corps commander, a lieutenant general, which only served to deepen the subterfuge. Fessenden hadn’t sent an email since, a respite he should have enjoyed. But he was too consumed with how to respond, which was why he was in a pub planning Britain’s most audacious military intelligence operation since MINCEMEAT deceived Germany about plans to invade Sicily.

“What’s the latest BUZZREP out of Vilnius?” asked Fessenden. He adjusted the Glock at his hip.

“Russian social media feeds are pushing positive for the last three hours, especially in the visual domain. They’re working a collaborator narrative, building the arc, and what we expect is they’ll shift by tomorrow night and crank the fear again. There’s been a series of IED attacks in Klaipeda,” said Williams. He tapped his tablet. “I can show you the model.”

“No need,” said Fessenden. He ran a hand through his thick gray hair.

“Sir,” said Williams. “TF Red is on standby. There’s a clear pipe set up, when you’re ready.” None of the defense networks could be trusted. Rather than fight it out in that corner of cyberspace, Fessenden decided to hide his command and control amongst the noise using a mix of couriers, coded messages and misdirection. An array of one-time virtual private networks tunneled through Europe’s commercial bandwidth. Social media accounts for misdirection were essential, even at home.

“We’re chumming already, near Baker Barracks and London?” Fessenden asked. The pub’s heavy curtains in its back room let no light out or in. Any sense of the outside world’s progress was reduced to the tiny 6-inch screen on the portal in his hand. It was like something C.S. Lewis would have enjoyed toying with, such powerful technology and irony, thought Fessenden. You can see everything and know nothing.

© By August Cole, run with his permission. This first appeared on the website of the Modern War Institute at https://mwi.usma.edu/underbelly/ .