Sharing Stories Of War And Racism In The VA Waiting Room

I showed up an hour early to my post op appointment today. I decide to sit in the waiting room … Continued 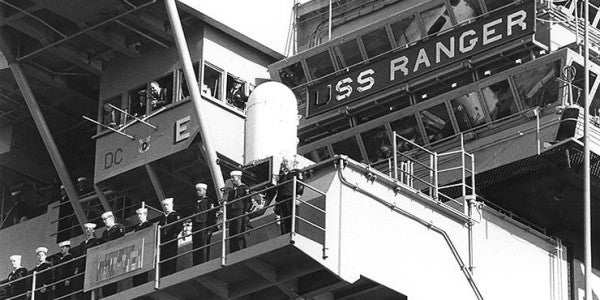 I showed up an hour early to my post op appointment today.

I decide to sit in the waiting room and catch up on “Gunsmoke” episodes on TNT. I sit in between two elderly African-American war vets from the Navy. One served on the USS Ranger during Vietnam and the Gulf of Tonkin incident. The other one, slightly younger, finished his 33 year Navy career as part of the Iran Hostage rescue effort.

It is not often I find myself completely inadequate to engage in a conversation. They told incredible stories of their time in uniform and in combat. They told heartbreaking stories of racial divide in the ‘60s, of African-American sailors hung in the bathrooms of their ship or tossed overboard.

They asked me dozens of questions of my experience in Iraq and Afghanistan, serving with multiple races and with women in combat and the Infantry. We laughed, listened and cried.

A nurse enters the room and starts calling our names to meet our docs. We shake hands and hug as we go our separate ways. The eldest vet makes a phone call, and we overheard him say, “Hey ma’am, I need to cancel my therapy appointment today. I just had the best session in years and I think I’m good this week. See you next week!”

Ok news: I did not get cleared from post op. Need to return next month. It looks like there is still a hole remaining in the palate but cannot confirm due to inflammation and the fact surgery was just last week. We will let it heal another month and try again.

The Awesome News: The VA’s toilet paper dispenser is still not fixed. And this was the first time that there was NO toilet paper in the dispenser. I’m not really sure what to do at this point. I asked five VA employees to point me in the direction of the mechanic shop or maintenance staff, and they all just stared at me with stating that wasn’t their job and walked off.

Thank you for all of your thoughts, calls, texts, emails, etc. They mean a lot to my family and I and absolutely contribute to a speedy recovery. I’ve been offline since surgery so I apologize I haven’t been able to respond to you all. I’ll get caught up this coming week.

Maj. D.J. Skelton is a U.S. Army Foreign Area Officer at the Naval Postgraduate School in Monterey, California. He led an infantry platoon at Second Fallujah and later commanded an infantry company in Afghanistan. He had hoped to be finished soon with his surgeries. He is not affiliated in any way with any company making or marketing toilet paper. This article represents his own views, which are not necessarily those of the Army, Navy or Department of Defense.