2. George Washington was fighting a two-front war — against the British and his own Continental Congress 1. Valley Forge was not … Continued 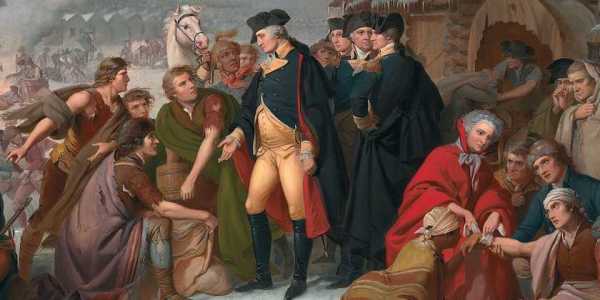 2. George Washington was fighting a two-front war — against the British and his own Continental Congress

1. Valley Forge was not the coldest winter of the Revolution

Yes, 250 years of illustrations have portrayed a Continental Army perpetually snowbound in its winter encampment. Yet historical records confirm that the winter of 1777-1778 was fairly mild by southeast Pennsylvania standards, with the mercury dropping into single digits only twice. It is true that nearly 2,000 soldiers died at Valley Forge, many from exposure, but this was more the result of an almost criminal lack of food and clothing, with disease completing the truly miserable picture. Entire regiments were without shoes, and foreign observers arriving at camp were astounded to see naked and barefoot American sentries manning guard posts wrapped only in tattered blankets.

Following the American General Horatio Gate’s astounding victory over a large British expeditionary force at the Battle of Saratoga in October 1777, there was a concerted effort led by the Massachusetts congressmen John Adams to relieve Washington and replace him as commander in chief with Gates. That effort, what Alexander Hamilton labeled an “execrable coup d’état,” was devoted to undermining Washington as the revolution's commander in chief. Only Washington's vastly underrated political instincts allowed him to deftly outmaneuver the near-treasonous Gates cabal and assert himself as the best chance America had to win its independence.

3. The winter at Valley Forge was the last time the United States Army was integrated until the Korean War

They do not appear in the famous paintings, nor in many of the accounts. But some 750 black soldiers, freemen and escaped slaves, a part of the 5000 or so African-Americans who enlisted to help America win its freedom, suffered at Valley Forge. Just as the freed slave Crispus Attucks, who died at Bunker Hill, is considered the first casualty of the American Revolution, the first death recorded at Valley Forge was a black man from Connecticut’s 7th Regiment known to posterity only as Jethro.

4. No, a desperate Washington did not sneak off to pray alone

Despite the numerous romanticized portraits of Washington on his knees in a snowy glade beseeching his redeemer for assistance, there is little evidence that this scene ever occurred. Unlike so many of his peers, Washington was not a particularly religious man – when he did attend Episcopal services he rarely stayed through the end of the mass. And though he certainly would have welcomed divine intervention at what was the lowest spiritual point in his career that February at Valley Forge, it is extremely unlikely that the famous scene, related third-had years later, ever took place.

5. The complete overhaul of Continental Army tactics at Valley Forge saved the Revolution

The mythical image of the musket-wielding Minuteman employing Indian-fighting techniques to devastate the squared ranks of Redcoats is just a fictitious fancy. Prior to Valley Forge the American soldiers had a tendency to cut and run at the first glint of a British bayonet charge. It was only after the Prussian soldier of fortune Baron Friedrich von Steuben arrived at Valley Forge to completely overhaul the Continental Army through a series of intense, non-stop drilling and training exercises that the American Army became a match for the military might of the British Empire.

Bob Drury and Tom Clavin are the authors of Valley Forge, which is being published just about now by Simon & Schuster.