I see a lot of people applauding the governors of Maryland, Virginia, Massachusetts and North Carolina for pulling their National... 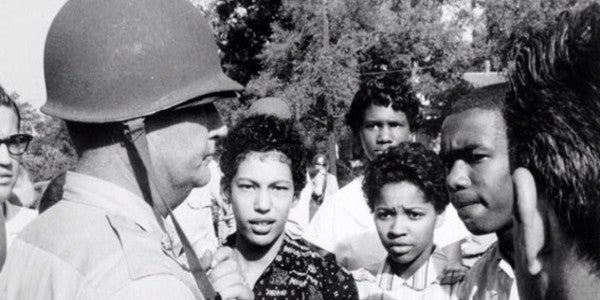 I see a lot of people applauding the governors of Maryland, Virginia, Massachusetts and North Carolina for pulling their National Guard troops from enforcing the Trump Administration’s policy of family separation among people crossing the Mexican border without permission. In addition, several other governors have said they won’t send troops to the border. All in all, some 11 states have repudiated the policy.

Yes, I understand the sentiment behind the applause. American troops should not be used to enforce a callous, cruel and divisive domestic policy. And laws should be enforced in a way that it improves a situation, not worsens it.

But I worry when the Guard gets caught between governors and a president. Keep in mind, the governors’ actions may not be the last move. For example, the Arkansas National Guard was used by the state to enforce segregation at Little Rock Central High School in 1957. (In the photo above, a lieutenant colonel in the Arkansas National Guard turns away black students at the Little Rock school.)

President Eisenhower responded by federalizing the Guard. But, for good measure, he also sent in the 101st Airborne, a unit with which he had spent time 13 years earlier as they prepared for D Day.

I can imagine Trump getting in a brawl in which he federalizes all the Guard units from dissenting states and tries to fire their commanders.

Interesting political sidelight: Two of the governors who have acted are Republicans in Democratic-leaning states, Maryland and Massachusetts. These are the politicians who have to be most sensitive to political trends. I’d also keep an eye on Republican members of the House of Representatives who have heavily Hispanic constituencies.