These 10 Fighters Went From The Military To The UFC

Editor’s Note: This article by Justin Sloan originally appeared on Military.com, the premier source of information for the military and... 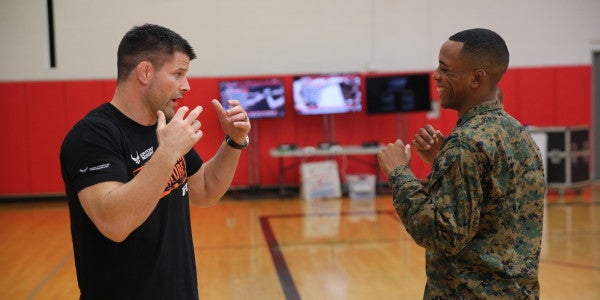 Editor’s Note: This article by Justin Sloan originally appeared on Military.com, the premier source of information for the military and veteran community.

It should come as no surprise that many service members and veterans have gone on to succeed in martial arts, particularly the UFC. For some, it's become a career, and for others, simply an obsession. For veterans like Marine-turned-UFC fighter Liz Carmouche, training can be both of the above, as well as a useful tool for smoothing out the transition process.

In an interview with Sports Illustrated, Liz noted that hitting the gym aided her transition to civilian life. She said, “If it wouldn't have been for that, I probably would have struggled and wouldn't be where I am today.” Just like UFC helped her transition out, the Marine Corps helped her be the fighter she is today. When asked about Marine Corps boot camp and what she's used from it in her UFC career, she replied, “I knew that if they couldn't break me, then no else could do it either.”

Like Liz, I’ve seen the positive effect of training on my transition firsthand. As a Marine Corps martial arts instructor, I sought out a Muay Thai kickboxing gym when I went to study abroad in Japan, and it not only helped with my transition out of the military, but it helped me transition into life in Japan. It gave me a community and purpose. Later, when I started working for the government in Washington, D.C., I became a kickboxing instructor at what is now UFC Gym. I taught for two years, made amazing friendships, and even had the chance to teach the cast of The Real World when they came by. They didn't air that part of the show though — I guess I was too hard on them.

Not all of us see training as a way of assimilating. According to Bleacher Report, UFC fighter Tim Credeur said part of the reason he joined the Navy was to get closer to UFC. Others compete while they are still active in the military. Whether they train to be part of a community or simply because they love it (the two can certainly overlap), each of the following individuals below, as noted by Fox Sports and Bleacher Report, have served their country and kicked butt in the Octagon.

Liz Carmouche: Liz served as a helicopter electrician in the Marines and did three tours in Iraq, and she fought Ronda Rousey in the first women's bout in UFC history.

Tim Kennedy: Tim served as an Army Ranger and was awarded a Bronze Star. He spent time in Iraq and Afghanistan as a sniper, and unlike Liz, he was active while competing.

Related: 10 questions only a veteran would ask Tim Kennedy »

Randy Couture: Randy served six years as an air traffic controller in the Army, and is a household name for anyone with an interest in UFC. Fighting until he was 48 years old, Randy and BJ Penn are the only two fighters in UFC history to win titles in two separate weight classes.

Brian Stann: Brian served in the Marines, was awarded the Silver Star, and retired to go on to become a FOX analyst.

Colton Smith: Colton fought while active duty as an Army Ranger. He fought in the UFC Fight for the Troops and was the Ultimate Fighter 16 winner.

Brandon Vera: Brandon served in the Air Force, but was medically discharged in 1999. He fought in the UFC's heavyweight and light heavyweight divisions, and is a Muay Thai specialist.

Jorge Rivera: Jorge served as a 19K Armored Calvary Scout in the Army, went on to be known for his heavy hands and boxing in the UFC, and retired from MMA in 2012.

Tim Credeur: Tim served as a sonar technician in the Navy immediately after high school, and (as mentioned above) joined in part because he planned on the military helping him to get closer to his MMA and UFC dreams.

Neil Magny: Neil served as a light-wheeled mechanic in the Illinois National Guard. In 2014 he tied the record for most wins in a single calendar year, with five wins.

Andrew Todhunter : Andrew served as a sniper in the Army. He's fairly new to UFC, but has an undefeated record of 7-0 at the moment.