As part of the Second Oath, Task & Purpose partnered with Team Rubicon and The Mission Continues to promote a national... 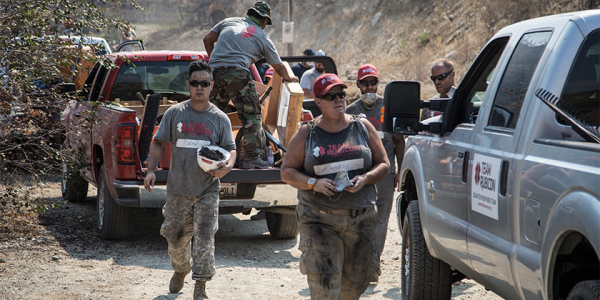 As part of the Second Oath, Task & Purpose partnered with Team Rubicon and The Mission Continues to promote a national movement around public service. By sharing and celebrating the stories of veterans making an impact in communities around the country, we hope to inspire even more selfless acts of service.

Three members of Team Rubicon share their stories of service. Here's why they committed to serving their country even after separating from the military.

“I’m a part of something much bigger than myself.”

Melanie Williamson is a U.S. Navy vet who’s deployed on multiple relief operations with Team Rubicon, including “Operation: Double Trouble” in her home state of Texas after the torrential floods in April 2015. The 28-year-old former aviation machinist thinks there is nothing comparable to the feeling you get while serving others with a big rowdy crew.

“Sure, I love to put a fubar through a wall, throw debris as hard as I can, and be so sweaty and exhausted at the end of the day I can hardly function. But what I truly love is helping people. The hugs and tearful handshakes break down my rough edges and bring me back to my passion for being a part of the solution. I’m a part of something much bigger than myself. I have a purpose again.”

“Helping those who can’t help themselves is an obligation that each of us has.”

Jerome Alexander Deniz, 31, is a former Chinese linguist for the U.S. Navy.After the military, he used the Post-9/11 G.I. Bill to finish his degree in Chinese studies and now works for SHINE Systems & Technologies, providing software training and workflow development to clients. He also works as a regional technology manager for Team Rubicon Region 9.

“Service continues to be of great importance to me because I strongly believe that everyone should pay it forward. Helping those who can’t help themselves is an obligation that each of us has. One small act of kindness can go a long way in helping improve someone’s quality of life, whether it’s emotionally, spiritually, or physically.”

“Every time I put on my Team Rubicon shirt, it reminds me why our organization exists and the ideals we stand for.”

U.S. Army veteran Jonathan Chiang lives in San Francisco serves as the Northern California communications coordinator for Team Rubicon. One of the most pivotal moments of his life was becoming a platoon leader for the first time and being entrusted with the personal and professional development, welfare, and discipline of soldiers and preparing them for deployment. He says the people he’s met through Team Rubicon have helped him gain a new core network of close friendships and unique experiences.

“Every time I put on my Team Rubicon shirt, it reminds me why our organization exists and the ideals we stand for: a literal band of brothers and sisters whom share a common bond of former service to our country, now bonding together for a greater service yet again. It’s truly an exhilarating and intensely satisfying feeling to be working, sweating, and serving next to these men and women who consistently put the needs of others over their own and sacrifice time out of their busy lives to help those in dire need.”

The Second Oath is an initiative led by The Mission Continues, Team Rubicon, and Task & Purpose uniting veterans around the country who are giving back to their communities through public service projects. Take a second oath of service and commit to serving your community. Don’t know where to volunteer? We’ll help you connect to local efforts in your area.