5 Bad Habits Preventing You From Landing That Civilian Job

Editor’s Note: A version of this article by Kyle Brown originally appeared on LinkedIn. I’m going to dig into and... 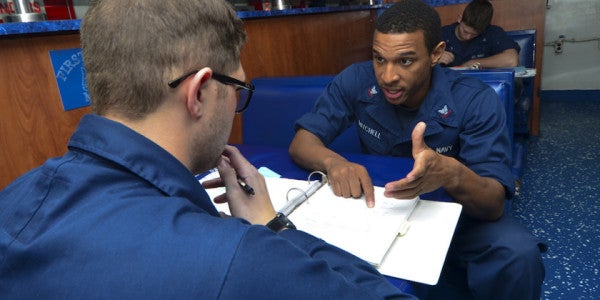 Editor’s Note: A version of this article by Kyle Brown originally appeared on LinkedIn.

I’m going to dig into and poke at what many consider to be sacred territory. If you don’t like it told straight this is likely a good time for you to find something else to read.

I’ll also add that any view laid out below is mine and mine alone. I’m not speaking for my employer, my military unit or anyone else.

Vets, when it comes to your job search… I’m over it.

I’m over the entitlement.

I’m over the whining.

I’m over the ego.

I am not over you.

To call myself an expert on anything would be a stretch. I do a job, I do it well, and tomorrow I’ll bust my backside to do it better. I interview professionals in a variety of fields almost every day. I screen resumes, meet with hiring managers, executives and search firms, and I talk with veterans trying to navigate the civilian job market.

I believe I have a pretty good pulse on what companies are looking for in a candidate at just about any level. I also believe I have some understanding of the challenge veterans’ face in the job market.

Eighty-five percent of the veterans, from any branch (active or reserve component) that I speak with, GET IT. They are working hard to land or progress in a civilian career. They read, they study, they take advice, and above all, they adapt.

The other 15% (and that number seems to grow everyday) make my blood boil. This group feels like they are owed something, that a company should fully understand their enlisted record brief or DD-214 and see value in the fact that they have a bronze star and scored 38 on their weapons qualification. This group posts things on LinkedIn like:

“Companies must not value veterans because I’ve applied to 300 jobs and no one will hire me.”

All while using their DA (or worse, combat) photo for a profile picture, listing obscure awards in their summary, and describing past positions with so much military jargon it would take three DIA analysts a week to decipher.

What’s really sad about this group is often they have had incredibly successful military careers. They are senior officers, E-8s and E-9s, all with impressive medal racks, previous postings, and fitness reports. What so many of them forget, though, is that to be successful in the military they had to adapt to the culture and norms of the military before they could succeed. It’s that same ability to adapt and overcome that will set them up for success in the civilian job market.

Companies, just like military leaders, want top performers in their ranks. Competition is steep, you have to bring your A game and frankly not everyone in the veteran community does.

I want to hire you but…

If I were looking for someone to infiltrate and disrupt an insurgency, or take a hill, or plan a helo insertion, you better believe I would care about those things. But today, I need someone to lead projects, or someone to help implement lean manufacturing concepts, or someone who can run a printing press.

I want to hear about what you’ve done, but in the back of my head I’m trying to connect it to my current needs. If you can’t make an effort to translate your experience, don’t expect me or the leaders I support to do it for you.

Desperation isn’t attractive, whether it’s hiring, dating, or begging for one more attempt to pass that last obstacle on the O course. You were successful in the military because you were mentally tough. Bring that same thick skin and toughness to the job search. When you whine, especially publicly, you’re shooting yourself in the foot.

3. Quit living in the past.

Once you’ve been to a couple military schools, a few field exercises or even a couple duty stations/deployments, the basic training stories stop. When I meet an E-7, and the first story he tells is about basic training, I know this guy hasn’t achieved much and is trying to live in the past. The same thing goes for your job search. When your LinkedIn picture is you in combat gear, sunglasses, and a ball cap, or a dress uniform, the message you’re sending is “I’m still in the military, maybe not physically but mentally. I view myself as a military professional.”

It gets even worse when your profile is littered with the jargon, awards, and other random facts and stories that have no relevance to the career you’re seeking.

Likewise, if you’re a vet and you’ve been in the civilian world for more than five years and you’re trying to tout your military experience and use it to get you in the door, just like that E-7, I assume you haven’t done much since leaving the service and I start to see red flags.

When you enlisted, did you go through a comprehensive training program that prepared you perfectly for basic training or OCS? I highly doubt it. The government threw you in the deep end, and you thrived. Your job search is no different; it’s not anyone else’s responsibility to prepare you for finding civilian employment. Stop blaming the weak, out of touch transition program (I know it’s not ideal) and take some personal responsibility.

There are hundreds of programs, events, and people who will gladly share insights, advice, and help connect you with opportunities, but you have to take the first step.

Company command does not prepare you for the board room. Sixty days a year as a squad leader in the Reserves doesn’t qualify you to be a lead on the manufacturing floor and battalion command doesn’t mean you’re bringing $250,000 of value to any company day one.

Anyone who tells you the military isn’t an ego machine is lying. We literally wear our resumes. Imagine walking around a civilian company in a t-shirt that included your salary history, performance ratings, certifications and college GPA. Crazy right? Not in the military.

This goes back to point number one. None of those things matter if you can’t translate them to meet the need the company has right now. In the military, it’s all about performance (and occasionally who you know.) The civilian world is no different.

Humility is hard to come by these days, especially in the military, but it could be the golden ticket to success in the civilian world. Understanding that you may have to take a few steps back to get ahead is a tough pill to swallow. It’s a process, I get that, but again you have to make the effort.

One of the first lessons taught to any soldier, sailor, Marine or airman is that a team is only as strong as its weakest link. I’m not advocating any social media “code reds,” but I think we as a community need to do a better job policing our own and holding each other accountable here on LinkedIn and other platforms.

We all want to help. However, help comes to those who help themselves. I receive numerous requests a day from job seekers and military professionals. If they haven’t put in the basic effort of setting up a solid profile, writing a resume, etc., then I rarely waste my time. I can’t and shouldn’t care more about their search than they do.

It’s time for the 15% to step up, take some ownership, and know that they have brothers and sisters willing to help them along the way with some tough love when needed.

Kyle Brown is an HR and Recruiting Pro who regularly partners with veterans and current service members looking for their next career. He is also currently serving in the Indiana National Guard.