I Stopped Drinking After I Left The Military. You Should Too

I served in 5th Special Forces Group in Iraq and other Middle Eastern countries. We worked hard, and were constantly... 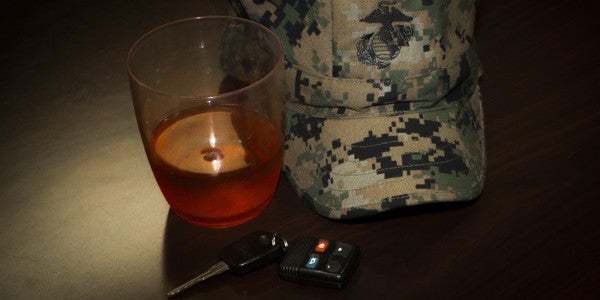 I served in 5th Special Forces Group in Iraq and other Middle Eastern countries. We worked hard, and were constantly either in intense training or on deployment. Drinking alcohol for this unit is a time-honored tradition, complete with games that call out soldiers. Anytime someone said, “This is my first time to…” or answered a similar question in the affirmative, they owed the team a case of beer. This kept the fridge full and allowed for regular rituals in the team room, where we’d have a brew and talk about daily logistics before heading home.

Coming from a family that regularly used alcohol, I never shied from these rituals. I drank with my buddies, subordinates, and superiors. It wasn’t until my father died in 2011, and I recognized that I was in shock, that I decided to cut back on my drinking.

I went to a group psychologist and a therapist off-post to help me deal with my grief. If I hadn’t quit drinking in those few months after my father’s death, I doubt I would have been able to handle my grief.

I slowly started drinking again, off and on for several years, through my separation from the military in 2013 and into last year. I was lucky. My wife asked me to stop drinking when she got pregnant, and so for two long stretches, I was totally dry. This gave me the perspective to compare my drinking days to my non-drinking days.

For me, the costs of heavy or frequent drinking — especially in the first few years after separation — are too high to justify the buzz.

Service members drink alcohol for plenty of reasons: camaraderie, tradition, and coping with the constant insane stresses military life brings. It’s no surprise that alcohol abuse has caused a crisis among service members. Responsible leaders have tried dozens of different policies to restrict drinking among their troops.

What about after an enlistment, though? When service members separate, many newly minted veterans turn to drinking to help manage all the emotions and stresses that come with such a significant life change. This trend may be the single most destructive factor contributing to veteran suicide and mental health issues.

Once I was on an even keel, I threw myself into research on how alcohol affects the body, and how to reduce the stress of separation without reaching for a drink. I was kind of shocked by what I learned. But to even get to that point, I had to look at things sober.

A moment of clarity

My first period of sobriety was for almost a year after I separated from the military. I didn’t have a therapist, but I was attending graduate school and working about 90 hours a week on my degree. It was brutal. While many of my classmates would drink together, I would focus on my studies.

I started to recognize in myself a lot of intense post-separation emotions that I’ve since observed in other veterans and heard them talk about. There was considerable anger at civilians; depression and grief over dead friends and living ones I left behind in the service; and anxiety and fear over finding a new career and starting a family.

After my daughter was born, I slowly started drinking again, and I almost immediately noticed an increase in the volatility of my emotions. The most powerful experiences almost never occurred right when I was drinking (unless I’d been on a two- or three-day binge). It was always a day or three after drinking that I felt most emotional. I had shouting matches with my wife, was curt or impatient with my young daughter, felt restless and uneasy throughout the day. I didn’t like doing many of the things I normally liked doing, and my sleep and eating always suffered.

Since then, I’ve done a large amount of research on alcohol’s effects on the body. For me, the costs of heavy or frequent drinking — especially in the first few years after separation and in any high-stress period (like the birth of a child, a new marriage or divorce, or separating from military service) — are too high to justify the buzz. Here’s what I learned.

The science of being snoggered

Alcohol affects the body in three ways relevant to psychological and emotional health, from the first drink to the effects alcohol has on the body as it leaves.

First, there is the drink’s direct effect on your brain, from the outside in. The brain absorbs alcohol sort of like a sponge takes on liquid: More alcohol is required to affect deeper levels of the brain.

How the brain absorbs alcohol: from the outside in.Eric Burleson

Even if you aren’t drinking enough to affect your balance, you’ll still suppress enough systems in your body to disrupt your sleep. That matters: In a recent study at Tel Aviv University, researchers found that any disrupted sleep can severely inhibit emotional control. If your emotions are more volatile, it’s harder to understand what’s important and what’s not, and you are likely to be much more reactive over little, inconsequential things. Drinking makes to harder to sleep well, and sleeping well is critical to a smooth transition.

Finally, as the effects of alcohol leave the body and the limbic and neocortical parts of the brain struggle to bring themselves back up to speed, you’ll be less able to do the things that are most important. This is the “opportunity cost” of drinking, and is what ultimately made me decide to stop. There are two parts to it: cognitive function and limbic resonance.

So why is all of this so much more important following separation from service? Because it’s a life change that can produce the same kinds of social and emotional stresses as divorce. Even if a transitioning service member never deployed or saw combat, the sense of loss and the sheer disorientation that comes from military separation can be as powerful on the brain and body as the loss of a family member.

It can be tempting to deal with these stresses with a couple beers or glasses of wine at the end of the day. Ultimately, though, alcohol can cause more stress and dysfunction than it’s worth.

What to do instead

Alcohol triggers a dopamine response, which is responsible for the desire/reward cycle. You get a similar brain effect from scrolling through social media or playing certain “addictive” video games.

These aren’t good solutions to your stress, either. A better response would be to pursue activities that activate oxytocin, serotonin, and endorphin releases. Aside from making you feel better, they can actually improve your ability to relate to your family.

I go on a lot of hikes in the woods and meet people for breakfast or coffee regularly. Those activities are good ways to relate with people without having the pressure to drink alcohol.

Here are five activities that will provide the same feel-good uplift that alcohol provides:

I’m no teetotaler. I have no doubt whatsoever that I will have another drink someday. Following any big stressful event, like separating from the military, though, drinking alcohol isn’t worth the complications. Ask yourself next time you drink if the second and third-order consequences of drinking are worth it. Chances are good that you’ll find what I did. Drinking alcohol does more harm than good to growth and living well.

Eric Burleson is a U.S. Army Special Forces veteran. He writes for separatingfromservice.com and other publications to give former servicemembers tools to deal with the emotional and psychological process of reintegrating into civilian life. He lives in Austin, Texas, with his wife and two kids. Join his email list to learn more about this process. It could save your life.