How A Different Kind Of Criminal Court Saved This Marine Veteran

Timothy Wynn enlisted in the Marines in 1999, but when the Corps extended his contract, he was sent overseas. In... 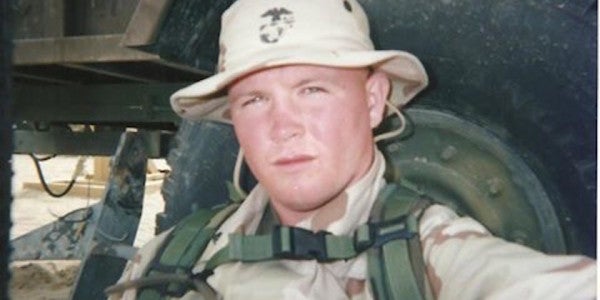 Timothy Wynn enlisted in the Marines in 1999, but when the Corps extended his contract, he was sent overseas. In 2003, Wynn deployed to Iraq with 2nd Military Police Battalion as part of the initial invasion.

“I was on stop-loss, and once they lifted stop-loss, everyone who was on it, came home,” said Wynn, who was honorably discharged as a sergeant. “Within 72 hours of being back at Camp Lejeune, I was back in Philadelphia, with really no time to just process where I’d just been.”

Four days later, he was arrested for aggravated assault, but because Wynn couldn’t be picked out of a lineup, he wasn’t charged.

“I got lucky there,” the 36-year-old Marine veteran told Task & Purpose.

His luck didn’t last. Wynn was arrested seven more times after that. Over the next four years, he struggled with substance abuse, and spent an entire year in the county jail due to his multiple arrests.

“I lost my girlfriend at the time, who is now my wife, and we had a young daughter and for the first four years of her life, I wasn’t in my daughter’s life because I was addicted to drugs, I was addicted to alcohol,” said Wynn, who now has two children. “Basically I was a mess.”

Wynn eventually kicked his drug habit and quit drinking, but unresolved mental health problems caused by his time in Iraq played a role in his final arrest.

In May 2013, Wynn got into a confrontation while on the road in what he describes as a “road-rage incident.” His final arrest landed him in the Philadelphia veteran treatment court, and that’s when things began to change.

Based on the drug treatment court model, veteran treatment courts offer an alternative to jail time or sentencing for veterans with substance abuse problems and mental health issues who are facing criminal charges.

Created by Judge Robert Russell in 2008 in Buffalo, New York, these state courts are problem-solving, or collaborative courts where defendants focus on rehabilitation during the course of the treatment. Participants are connected with representatives from the Department of Veteran Affairs, Department of Labor, state departments of veteran affairs, vet centers, veteran service organizations and volunteer veteran mentors.

Marine veteran Timothy Wynn during his 2003 deployment to Iraq.Photo courtesy of Timothy Wynn.

“I began my treatment and I had all this support in this courtroom, which was very unusual to me,” said Wynn, who was sentenced to nine months in the treatment court, but graduated in six. “People were actually going out of their way to call me when I wasn’t in the courtroom, which was special. They kept up on me to make sure I was going to my appointments. They really had my best interests in hand.”

While at the treatment court, Wynn met with behavioral health specialists from the VA and was diagnosed with post-traumatic stress disorder, for which he began receiving treatment. Additionally, he attended counseling sessions with his fellow veterans, something he says helped immensely.

“I was shoulder-to-shoulder again with my brothers and sisters who went through the same things I went through, which was pretty special,” said Wynn. “I had that camaraderie back in my life from being in court. I had that support system again where I could call another veteran and say something that didn’t sound crazy to them, they understand what I’m talking about. It’s just a special, special court.”

If participants successfully complete and graduate from the course, their charges can be dismissed and records wiped clean, though that depends on the charge and the agreement made between the defense, prosecution, and the court judge.

When Wynn graduated, his charges were expunged, except for one which he is in the process of having removed from his record. Now, he works at Philadelphia's Department of Behavioral Health and as a peer mentor at the veteran treatment court he attended, and at the local county jail that he was in and out of for a number of years.

According to Justice For Vets, a nonprofit group focused on increasing the number of veteran treatment courts in the country, as of 2012 there were roughly 181,500 veterans in federal prisons and county jails, a decrease from 203,000 in 2004. Between 2001 and 2012, veterans who served during the Global War on Terror accounted for 13% of veterans in prison, and 25% of veterans in jail.

18th Chairman of the Joint Chiefs of Staff Gen. Martin E. Dempsey answers a question from an audience member at the Justice For Vets conference in Washington D.C., Dec. 4, 2013.Department of Defense photo

Thanks in large part to the treatment court, Wynn is gainfully employed, attends community college and his home life with his wife and two daughters is stable, he said.

“It’s not an easy thing to do,” Wynn explained. “You don’t go in there and just get a slap on the wrist. You really have to work and you have to earn it. That’s what’s great about it. You have to get up in the morning and take control of things. That’s what works the most, putting us back in charge of our lives and being accountable of things.”

According to Municipal Judge Patrick Dugan, who oversees the Philadelphia veteran treatment court that Wynn attended, part of the treatment court’s success is that the participants all share common ground: military service.

“When a defendant comes up, for the most part they go into their military background, they go to parade rest, they say, ‘Yes sir,’ or, ‘No sir.’ That doesn’t happen with typical criminal defendants,” explained Dugan, a former paratrooper who serves as a military lawyer in the Army reserves.

Dugan is also a veteran of the wars in Iraq and Afghanistan, and served in South Korea as well as Panama. He has presided over Philadelphia's Veterans Court since it began in 2010, and since that time more than 500 veterans have graduated from the program, which has a 10% recidivism rate.

“At veterans court, we can tap into that pride that most service members have,” Dugan said. “It’s a courtroom, where as a judge, I get to feel really good about what’s going on, a lot.”