Derek Weida, founder of Straight Legless Clothing, doesn’t speak for all veterans, but he does speak for a certain type.... 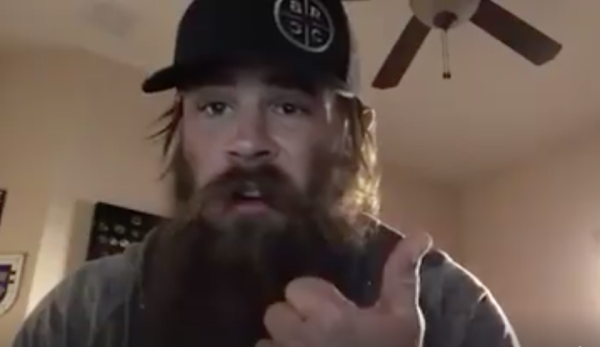 Derek Weida, founder of Straight Legless Clothing, doesn’t speak for all veterans, but he does speak for a certain type. His audience is largely shared by a growing number of military-oriented companies, organizations, and blogs that celebrate, rather than lament, the experience of being a veteran in post-9/11 America. It’s an audience that could be described, bluntly and without risk of causing offense, as a bunch of unapologetic grunts.

And Weida, a former 82nd Airborne paratrooper whose right leg was amputated after being struck by an insurgent bullet in Baghdad in 2007, is the most unapologetic of grunts.

Over the past several years, Weida has garnered a massive following among service members, veterans, and civilians who’ve found inspiration in his ascent from suicidal wounded warrior to successful entrepreneur and fitness personality — a journey that’s been thoroughly documented in a series of online videos, and which has lent Weida tremendous credibility within the veteran space.

Weida’s latest video, posted on April 29 on his Facebook page, is accompanied by this tagline: “Stop with all the 22. Change the message. Go be great. Show the world.” Sporting a Black Rifle Coffee Company baseball cap and armed with a spit bottle, the heavily bearded Weida rails against what he views as a problematic approach to dealing with veteran suicide — namely, viral awareness-raising campaigns like the 22 Push Up Challenge.