Sgt. 1st Class Erik Kingsley was driving his brother-in-law to the airport in the early morning hours of April 1,... 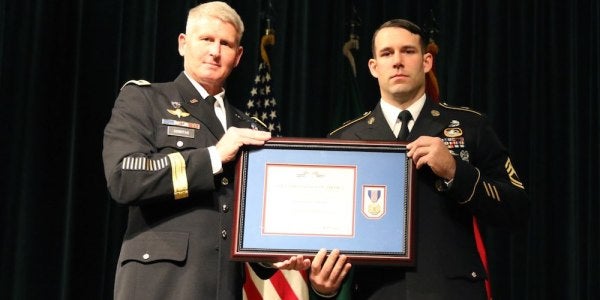 Sgt. 1st Class Erik Kingsley was driving his brother-in-law to the airport in the early morning hours of April 1, 2017, when he noticed the headlights of a vehicle in a ditch and sparks underneath it.

Kingsley slammed on the brakes and told his wife to call authorities.

He and his brother-in-law then ran toward the vehicle.

Trees and brush surrounded the vehicle, which was locked. Kingsley broke the window and turned off the car.

“He was pushing the foot on the accelerator the whole time, which was causing the engine to overheat and the embers to shoot from the bottom to the top of the car,” Kingsley recalled on Thursday.

Less than a minute later, he noticed the flames were worse. He told his brother-in-law and wife to move their personal vehicle away.

As they moved their vehicle, Kingsley pulled the driver out of the burning car.

“I walked maybe 10 feet and the car exploded, and that's maybe when the whole thing went up in flames and it was completely gone,” Kingsley said.

Kingsley's actions were recognized Thursday when he was awarded the Soldier’s Medal for Heroism during a ceremony at the John F. Kennedy Special Warfare Center and School. It is the Army's highest award for heroism outside of combat.

“This indeed is one of our nation’s highest honors,” said Maj. Gen. Kurt Sonntag, commanding general of the school.

Sonntag, who presented Kingsley with the medal, described him as a hero and “standard” who fellow soldiers should strive to be.

“The actions on that day speak volumes about who Erik is,” Sonntag said. “It highlights that commitment to his nation, to his fellow man and his fellow soldiers. He willingly put his life on the line for a complete stranger.”

Kingsley’s wife, Ashley, was also in the car that April morning, along with the couple’s two daughters. It was about 3:30 a.m. and they were traveling on U.S. 301-Interstate 95 Business, taking Kingsley's brother-in-law to the Raleigh airport.

She said the incident didn’t register with her immediately.

“Honestly, I wasn’t even really thinking about you,” Ashley Kingsley said, turning toward her husband after Thursday’s ceremony. “I was thinking about the kid in the vehicle, and I still wonder what he’s doing now.”

The Kingsleys said the driver was in his early 20s.

Ashley Kingsley said she wasn’t worried about her husband. “I just never thought twice about his capability that day,” she said.

Kingsley, who is with the 4th Battalion, 1st Special Warfare Training Group, credited his rigorous special operations training for his ability to respond quickly that day.

Kingsley deployed during Operation Iraqi Freedom while serving with the 25th Infantry Division.

In 2016, he moved to Fort Bragg and was assigned to the 4th Battalion, 1st Special Warfare Training Group as a Special Forces trainer, advisor and counselor.

“I wouldn’t say it was easy, but I was more confident in my abilities to be able to save this guy, or at least attempt to save him,” Kingsley said. “I didn’t question it during the time. I wasn’t really thinking.

“I kind of let training take over and muscle memory hit, and it’s because of the years of doing this all over and training all over the world it’s second nature. But after the fact is when it hits, you start replaying it in your head like ‘Huh, what really just happened?’ There was danger there.”

After pulling the driver from the vehicle, Kingsley assessed the man's injuries and bandaged him until emergency crews arrived.

“They came running up to me thinking I was the one in the accident because I had board shorts, flip flops and a tank top, and I was covered in soot, his blood and whatever else was there,” Kingsley said.

He told firefighters no one else was in the vehicle, and he gave a statement to the state trooper.

Sonntag said Kingsley's actions are the epitome of years of training.

“He recognizes that this service to our nation, it’s not just a job,” Sonntag said. “It’s a profession. It’s a vocation. It’s something he strives to excel and to continue to raise the bar each and every day, so that when the time comes, he can perform as advertised, and he did.”