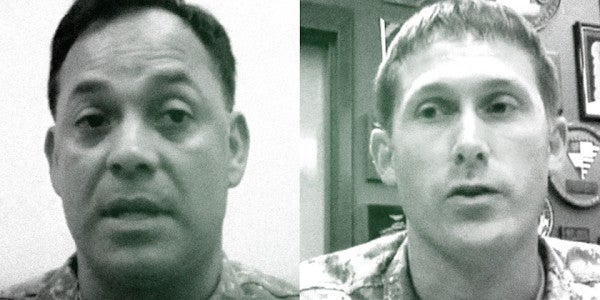 On June 11, 2007, Sgt. 1st Class Antonio Gonzalez and Sgt. 1st Class Mark Roland, both Green Berets with Special Forces Operational Detachment 732, were on a routine patrol with their team in Uruzgan, Afghanistan, when a nearby element of Afghan security forces came under intense fire. The men had just taken tactical pause for chow. Now, the MREs would have to wait.

Hungry as they were, the Americans didn’t waste any time. The 12-man Special Forces team jumped in their vehicles and headed directly toward the ambush — a barrage of small arms fire, rocket-propelled grenades, and mortars. The enemy force was about 80 insurgents strong, but the men of ODA 732 didn’t wait for reinforcements to arrive. They were the reinforcements. With their Afghan allies pinned down and on the verge of being wiped out, it was on them, and them alone, to get the job done.

“We surprised the enemy by not just going into their trap, their ambush line that they had set up for us,” Gonzalez later recalled in an interview with Stars and Stripes. “We did a bold flanking maneuver to the left, which caught them off guard, and the surprise was on them.”

The surprise came from Gonzalez’ rifle after he spotted a Taliban fighter with a belt-fed weapon and a radio. “I engaged him and controlled that individual by firing and killing him,” he said. Meanwhile, Roland’s vehicle encountered more insurgents maneuvering through a wadi, one of whom stopped to spray the side of the Humvee with an AK-47 from about 10 feet away.

“[It] hit the side of the truck, it hit the driver’s windshield, it hit the turret of the vehicle, and it also struck my gunner in his chest plate,” Roland told Stars and Stripes.

Because of the proximity and depth of the wadi, Roland’s gunner was unable to get a good angle on the Taliban fighter. At that point, Roland decided to dismount the vehicle and enter the wadi alone. But first he tossed a grenade. “I threw it in the trench,” he said. “When the grenade hit the trench, I could see the enemy fighter move south in the trench about 10 feet, so I at least knew what direction he was in.”

The grenade exploded and Roland jumped into the wadi. The insurgent with the AK-47 was still alive and standing only a few feet away. Roland immediately killed him. Above, Roland’s gunner, who had survived the shot to the chest and had also dismounted the vehicle, aimed his rifle down into the wadi and killed another insurgent. The rest of the Taliban fighters managed to get away.

This, however, was not a situation the Green Berets could kill their way out of. With dozens of insurgents, including snipers, firing at them from three sides, and the Afghan soldiers not doing much to help repel the attack, it was only a matter of time before they got overrun. To gain fire superiority, the Green Berets would need to consolidate the scattered friendly forces and fight back as a cohesive force.

Back in the vehicle, Roland and his gunner spotted a group of Afghan soldiers hunkered down in a hole, enveloped in incoming fire. Thinking the Afghans were huddled around a casualty, Roland sprinted to the hole. “I got with the Afghan soldiers,” Roland recalled, “at which point I identified none of them were wounded, they were just pinned down by the volume of fire that was coming over the top of that hole.”

Related: The Soldier Who Finished An Ambush With A Knife »

Not far away, Gonzalez was confronted with a similar situation. From his position, he could see another group of Afghan soldiers — four total — hunkered down and not doing anything to contribute to the fight. “It was a good distance away,” he recalled. After attempts to beckon the Afghans back to the vehicles failed, Gonzalez decided to go to them.

“Without regard for his life, Sergeant Gonzalez left the protection of his armored vehicle and moved on foot the remaining 30 meters of the kill zone to the pinned down soldiers,” the citation for Gonzalez’ Silver Star reads. “Over the course of three trips through enemy fire, he rescued all four soldiers and brought them back to the safety of his armored vehicle. Each time he risked his life under intense fire to rescue soldiers unable to maneuver on their won.”

Roland’s Silver Star citation reads similarly: “Exposed to enemy fire and delayed by an inability to communicate with those who were pinned down, Sergeant Roland moved four of the soldiers back to his vehicle, while directing the remaining four to another detachment vehicle.”

The battle raged on for several more hours, but quickly turned in favor of the Green Berets and their allies. By the time the dust settled, more than 60 enemy fighters were dead, including two Taliban commanders. But, for Roland and Gonzalez, it was just another day on the job. Both had already been awarded Bronze Stars for a previous battle, and, of course, there would be many more battles to come.