UNSUNG HEROES: This Squad Leader Took Command Of A Platoon During An Enemy Ambush

On May 21, 2011, Marine Sgt. Matthew Parker was on a patrol in Helmand province, Afghanistan, in search of enemy... 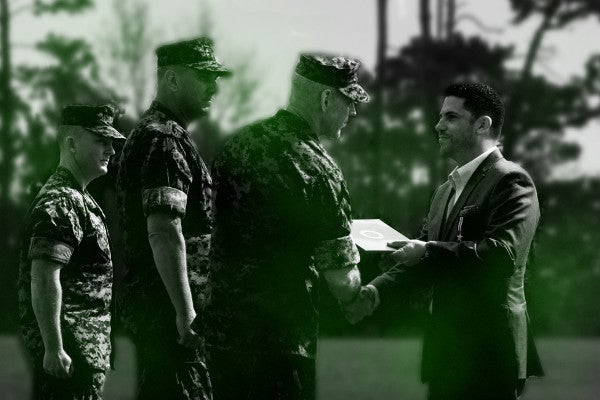 On May 21, 2011, Marine Sgt. Matthew Parker was on a patrol in Helmand province, Afghanistan, in search of enemy weapons. Parker, a squad leader with 3rd Battalion, 2nd Marine Regiment, set out with the rest of platoon after receiving reports that insurgents in the area had recoilless rifles.

The mission was to find the enemy, identify that they had the weapons, and then call in an airstrike; however, when the platoon began crossing a small riverbed, they suddenly took fire.

Parker’s platoon commander and platoon sergeant were injured in the initial volley.

Related: UNSUNG HEROES: The Marine who was knocked out by an IED, woke up, and began treating his injured men »

Parker rallied the platoon and coordinated the Marines’ fire and movement, close-air support and rocket attacks as the ambush devolved into a pitched battle that lasted eight hours.

After the Marines forced the enemy to break contact, Parker then arranged for the injured Marines to be evacuated.

“Parker is the exact example of what you’re expected to do,” said Col. Chris Dixon, Parker’s battalion commander at the time, in a Department of Defense news release. “You have to take charge no matter the situation and get the mission done, regardless of what it takes to do it.”

For his actions that day Parker was awarded the Silver Star on March 19 of this year, during a ceremony at Camp Lejeune, North Carolina.

“I just want you to know I appreciate you,” said Parker who medically retired from the Marine Corps in February in 2015. “ I didn’t do anything special; I just did what I was supposed to do and I’m lucky that I had good Marines who were backing me up.”