When William “Wes” Sumner, then a captain, deployed to Baghdad in 2003, the Army expected him to use his master’s... 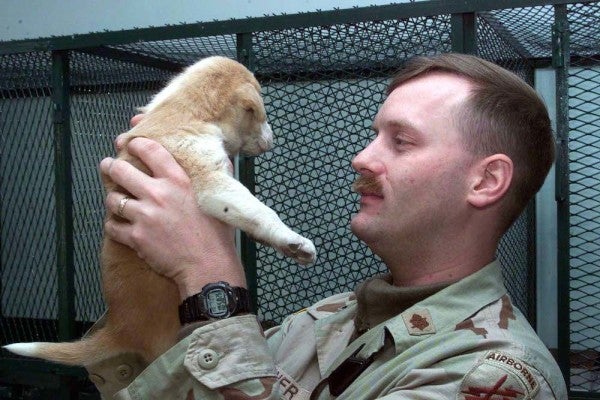 When William “Wes” Sumner, then a captain, deployed to Baghdad in 2003, the Army expected him to use his master’s degree in archaeology to help recover Iraqi artifacts and manage archeological sites. He asked his superior officer if there was anything else he could do to help, he was told he could take a look at Baghdad’s zoo.

Sumner was horrified to discover that out of 650 animals living in the zoo before the war, only around 30 remained. The structure suffered combat-related damage, and looters had stripped the zoo bare and stolen animals for eating or sale on the black market. Some cages were now storing weapons, and all but a handful of employees had abandoned the zoo.

The only remaining animals were large predators capable of fighting off looters, like filthy lions and tigers on the brink of starvation, and,in some cases, so thirsty they were incapable of drinking water on their own. “I had no inkling and I had no background skills and I showed up and basically said I’m in charge of the place,” Sumner told CBS News in 2004.

A woman and her child look at a camel at the Baghdad Zoo, as Abdullah, 8, poses with a photograph taken on July 20, 2003, at the same site showing a U.S. soldier visiting the newly-opened zoo.

Sumner organized zoologists, conservationists, veterinarians, and fellow soldiers to protect the remaining animals and restore the once-massive zoo. That was no easy task, considering they were in a war zone where it was “not unusual to hear nearby explosions and fighting nearby while we worked to stabilize the animals,” Sumner recalled, according to a U.S. Army account of his actions. He had to contend with scattered unexploded ordnance and wandering looters.

Sumner’s team also rescued neglected animals from other small zoos, black market dealers, and the palaces of Saddam Hussein’s family, rounding up 19 lions, two tigers, four mountain bears, and 16 valuable Arabian race horses. The zoo reopened to the public four months after Sumner’s arrival. Within a year, he increased the zoo’s population to 120 animals, ranging from tortoises to cheetahs and pelicans. When the Iraq War ended in 2011, the zoo was still operating and thriving.

Aside from rehabilitating suffering helpless animals, Sumner’s efforts also helped win hearts and minds. “We were not only saving the animals, but we were also helping the people who worked with them,” Sumner said. “We gave them jobs, fed their families, provided medical care and forged friendships that last until this day. We also provided a space in Baghdad where families could go to avoid the worst of the ongoing violence in the city.”

In 2010, Sumner published a children’s book about his efforts, co-authored by Kelly Milner Halls, titled “Saving the Baghdad Zoo: A True Story of Hope and Heroes.” The book chronicles the true stories of complex and memorable rescues undertaken by Sumner’s team, such as a cramped Humvee ride with a sick camel under sniper fire and an alcohol-addicted bear immune to anesthetic darts.

“I feel humbled to know that I was part of a mission that helped to unite people from all backgrounds in Iraq and from all over the world and save a portion of Iraq’s national heritage for future generations,” Sumner told the U.S. Army.