UNSUNG HEROES: The Army Vet And NYPD Officer Shot In The Line Of Duty

The New York City Police Department is sworn to protect America’s largest city, and that challenge couldn’t be harder. Having... 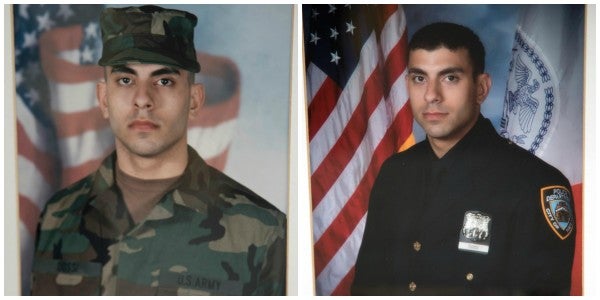 The New York City Police Department is sworn to protect America’s largest city, and that challenge couldn’t be harder. Having to police with a massive and diverse city of more than 8 million people, the threat of terrorism or unprovoked armed ambush, and current political tensions are not small tasks.

For two NYPD officers, the risk they burden became all too real recently. The officers were in plain clothes responding to a robbery at a grocery store when they were shot and wounded by two assailants, according to the New York Times.

Andrew Dossi, 30, and fellow officer Aliro Pellerano, 38, were approaching two men near the scene of an alleged robbery when one of the men opened fire.

They were both hit multiple times; Dossi in the back and arm, Pellerano in the arm and abdomen. The officers returned fire, according to NBC News, and struck one of the assailants in the abdomen.

Dossi, as it turns out, is a seasoned U.S. Army veteran who has deployed to Iraq twice and is still in the Army reserves. According to an NBC News report, he was set to deploy to Africa with the reserves shortly after the shooting. That’s likely off now, his father told a local NBC News affiliate, noting that one of the bullets narrowly missed Dossi’s spine.

Here’s the kicker, neither of the men were forced to be there, and were at the end of their shift. Rather than go home, they decided to help their fellow officers and respond to an active call that was in progress.

“They were going home, they jumped into a car and they ended up getting into this fierce firefight,” NYPD Chief of Department James O'Neill told Yahoo News.

The NYPD, one of the top law enforcement agencies in the world considering the city’s notoriously low crime rate and size, has many modern American veterans within its ranks, as do many of the police forces across the country, filled with brave men and women who want to serve their communities the way they served their country.

Dossi is just one representative of that. His father told NBC News that his son knows his job is a dangerous one, but is someone who believes in helping people. If the country hopes to move forward amid massive tensions and tough questions about race relations and law enforcement, it’s going to need brave men and women like Andrew Dossi.

The NYPD has arrested two suspects in the shooting, according to Yahoo News.