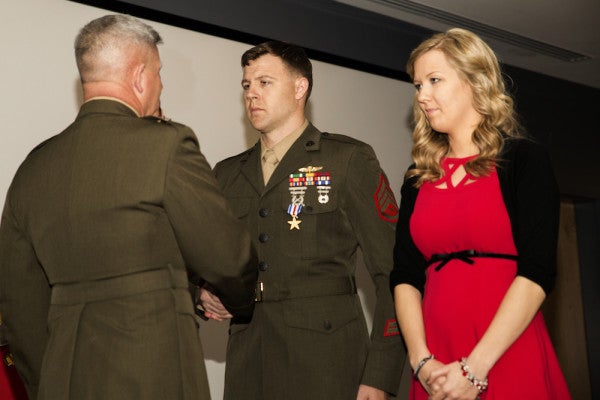 On Mar. 6, Andrew Seif, a 27-year-old decorated Marine Corps staff sergeant, was awarded the Silver Star — the third-highest medal for valor — for conspicuous gallantry in aiding a wounded comrade during a mission in Afghanistan in 2012.

As he and Sgt. Justin Hansen approached the compound, Hansen was shot multiple times. After being wounded, Seif rushed to treat the injuries while returning fire. He then moved across open ground, exposing himself to enemy fire to enter the compound and clear the building.

Without time to wait for reinforcements, Seif single handedly secured the location and took out a handful of insurgents, including the bombmaker.

Hansen, despite aid from Seif, did not survive.

During his award ceremony, Seif accepted on behalf of Hansen and his entire team, and he suggested that everyone reach out to the families of the MARSOC Marines who had been killed in action.

“Make sure that you remember those families out there. Contact them. Let them know that they're still part of the family,” he said during the ceremony.

In addition to the Silver Star, the USO named him as the 2013 Marine of the Year.

But just four days after he received the Silver Star, Seif was among the 11 service members killed in a training exercise gone wrong.

Military Times, through a Freedom of Information Act request, found that these troops should not have been in the air that day due to inclement weather, which ultimately caused the crash.

Seif was born in Fairbanks, Alaska, and raised in Albuquerque, New Mexico, up until middle school when they relocated to Holland, Michigan. He enlisted in the Marine Corps in July of 2006 upon graduating from high school.

Rep. Bill Huizenga, a Republican from Michigan, said in a statement, “Having met Staff Sergeant Andrew Seif in person, I could tell he was a special kind of Marine. He was a man of great character who deeply loved both his family and his country,”

He added, “West Michigan and the entire nation mourn the loss of a true American hero.”