UNSUNG HEROES: This Marine Gave His Life Carrying One Of His Wounded Men To Safety 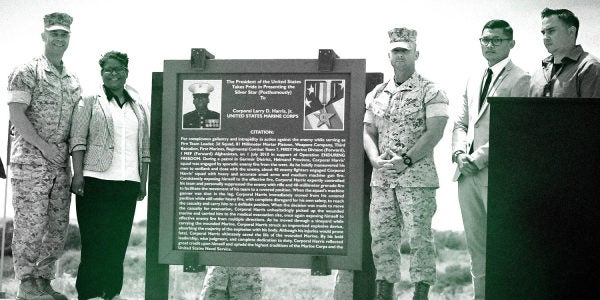 On July 1, 2010, Marine Cpl. Larry D. Harris, a mortarman with 3rd Battalion, 1st Marine Regiment, was on a patrol through the Garmsir District in Helmand province, Afghanistan, when his squad came under attack.

Under fire from approximately 40 enemy fighters armed with small arms and medium machine guns, Harris and his team laid down suppressing fire with rifles and 40mm grenades, as they made their way to a covered position. According to a Department of Defense news release, when a fellow Marine was shot in the leg, Harris ran from his position of cover to retrieve the wounded man as the enemy fired on him from multiple directions. As Harris carried the wounded Marine toward the medical evacuation site, he passed through a vineyard where he struck an improvised explosive device.

Harris absorbed most of the blast with his body, and though he succumbed to his wounds, his actions saved the life of the wounded Marine.

Related: UNSUNG HEROES: This Corporal Died Leading His Marines Until The Very End »

For his heroism and selfless sacrifice, Harris was posthumously awarded the Silver Star, which was presented to his family during a ceremony at Marine Corps Base Camp Pendleton, California, on March 4, 2011, notes the San Diego Tribune.

On May 19, during a ceremony at Camp Pendleton, Harris became the latest Marine to have an obstacle in the Crucible named after him. The Crucible takes place at Edson Range on Camp Pendleton and is the final rite of passage that recruits must undergo during Marine Corps boot camp. Over the course of 54 hours, recruits must navigate 24 challenges, all named after Marines who died performing valorous acts in combat.

The newly named Harris Trail will require recruits to use hand and arm signals, team formations, and will test them on their improvised explosive device awareness skills.

“[I] hope this citation going up today brings some sort of peace to his family and to my fellow Marines of 3/1, knowing that once again he is where he belongs being looked up to and being respected by a new generation of Marines,” said Ian Gilbert, who served with Harris in Afghanistan.

More than 17,000 recruits are transformed into Marines at Marine Corps Recruit Depot San Diego each year, and now, that many more will know of the sacrifice Harris made for his fellow Marines.

“For that brief moment in time, when the recruits come to the obstacle and stand at attention to read and learn about Cpl. Harris, he will be the center of attention once again, which he so well deserves” said Gilbert.