UNSUNG HEROES: This Marine Provided Accurate Sniper And Rocket Fire To Save His Men 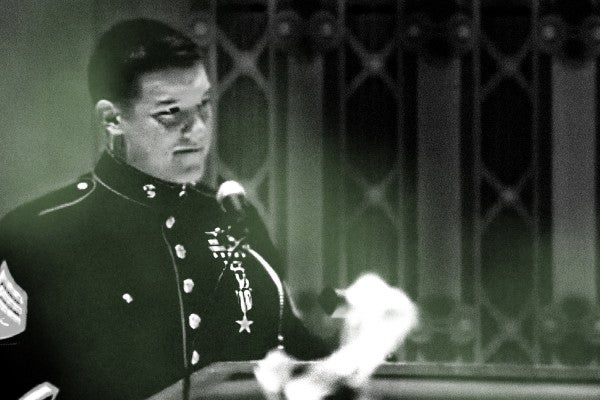 On June 6, 2011, in Helmand province, Afghanistan, two teams of reconnaissance Marines came under heavy enemy fire. One squad, designated as team one, was pinned down in a canal with enemy fighters just 100 meters away. The assault was so intense that the Marines were unable to return fire or reach an injured Afghan soldier to provide first aid.

The second squad of Marines, team two, was providing fire for the pinned-down Marines when a member of that squad, Sgt. David Gerardi, a Marine sniper, sprinted directly toward the men trapped in the canal, reports the Pittsburgh Post-Gazette.

Gerardi saw a position at a mud wall in front of the canal that would give him a clear line of sight to the target that presented the greatest danger — an enemy machine gunner. He crossed an open field to get to a wall less than 45 yards from the enemy, all while taking fire from machine guns and rocket-propelled grenades.

“The training kicked in,” said Gerardi in a Department of Defense news article. “Going to that position just made sense. That way, I wasn't conflicting with the other guys' line of fire.”

According to the Post-Gazette, with rounds “cracking literally within inches of his head,” Gerardi “quickly and calmly” located the enemy machine gunner through a hole in the wall and killed him with three rounds from his sniper rifle.

Due to Gerardi’s actions, the Marines pinned in the canal had a brief reprieve and took advantage of the lull in enemy fire to recover the wounded Afghan soldier, but remained trapped in the canal as rounds cracked overhead and explosions went off around them.

As a team member called in an airstrike, Gerardi continued to provide suppressing fire, before he left cover again, this time to grab an M72 Light Anti-Tank Weapon, according to Military Times, which used to fire a rocket at a compound occupied by enemy fighters.

Then, Gerardi spotted another fighter in the tree line, and killed him with a single shot from his sniper rifle.

Afterward, U.S. warplanes dropped a guided bomb as artillery fire struck the enemy position, giving the Marines a chance to withdraw as night fell, marking an end to the five-hour firefight.

“I've been blessed to serve with the best Marines and soldiers,” said Gerardi during the ceremony. “I've had the best leadership that taught me everything leading up to that gunfight.”

Gerardi gave a short and heartfelt speech, in which he thanked his fellow Marines and implored the audience to remember the fallen.