Every week, Task & Purpose devotes this column to stories of heroism from the men and women who served in... 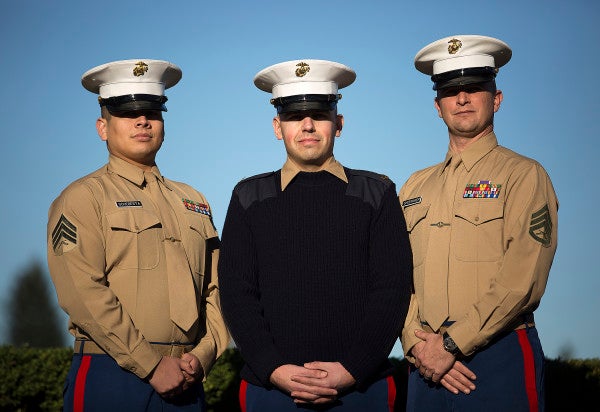 Every week, Task & Purpose devotes this column to stories of heroism from the men and women who served in the American armed forces after 9/11. These stories are often stories of valor in combat — be it an Army sergeant first class who gave his life exposing himself to fire after an IED explosion in Iraq, an Air Force combat controller who braved enemy fire to call for air support in Afghanistan, or a Navy Corpsman who ignored his own wounds in an IED attack in Afghanistan — the past decade and a half of warfare is rife with stories of extraordinary gallantry and selflessness in the name of national service and brotherhood.

But this week’s story of unsung heroism takes place far away from the deserts of Iraq or the rugged mountains of Afghanistan, in a strip mall in the Seattle suburb of Lynnwood.

There, in the Armed Forces Career Center office, three Marine recruiters thwarted a robbery in progress by chasing and apprehending a man who had just attempted to rob a 60-year-old woman.

In interviews with Task & Purpose, the Marines declined to describe their actions as heroic, Staff Sgt. Ben Shoemaker, who actually placed the suspect in the wristlock, described the attention they received as “a little overrated,” saying, “I did what everyone should do in that situation, why wouldn’t you help someone who needs help?”

But in exploring the details of the attempted robbery, it quickly becomes evident that the men disregarded their personal safety and well being in the interest of the public good. Words like “heroism” exist in the English language for the sole purpose of describing actions like these.

Sgt. Ricardo Schebesta, Staff Sgt. Bryson Twigg, and Shoemaker, were in their office around 5 p.m. on Jan. 6 when they heard a loud series of honks. Schebesta described it to Task & Purpose as “between 15 and 20 honks.” Shoemaker said in a phone interview that he first thought it to be a car alarm. It turned out to be the victim of the crime, chasing two robbers in her pickup truck between the road and the parking lot, including driving over grass slopes, and desperately trying to get someone’s attention.

Despite being told by the victim the suspects were armed with a gun, the Marines ran through rush-hour traffic to pursue them. Shoemaker subdued one of the suspects using a wrist lock, a technique taught in the Marine Corps Martial Arts Program, and held the suspect until police arrived to arrest him. Police retrieved a metal bat from the suspect’s pants but have not yet located his accomplice.

Schebesta told Task & Purpose that he and Twigg ran toward the two men, while Shoemaker approached the woman in the truck.

“At first I thought she was the problem,” Shoemaker said, “trying to run over a guy.”

But when Shoemaker reached the woman and banged on her window, she said that the two men had tried to rob her. She said they had a gun.

The Marines gave chase, pursuing the men across the parking lot and through traffic. When asked if hearing that the men had a gun, while he was unarmed, gave Shoemaker pause, he said curtly it did not. He said that knowledge resonated with him in a different way.

“It made it that much more important to me that they couldn’t get away,” the Marine infantry unit leader told Task & Purpose.

“I think we did what we’re known to do as Marines,” Schebesta told Task & Purpose. “We’re happy in this community to give the Marines a name outside of what people just hear in the news.”

In his dress blue bravos, Shoemaker caught up with one of the suspects, and immediately took control of him using a wrist lock technique taught in the Marine Corps Martial Arts Program.

The hand-to-hand combat program, nicknamed MCMAP, has a mixed reputation among Marines who sometimes find it hard to believe the program’s techniques work.

“Apparently MCMAP works,” said Shoemaker, who has a green belt in the program, with a little bit of a laugh. “I didn’t think about what I was doing at all, I just did it.”

There was another important aspect of Marine Corps culture that colored Shoemaker’s interaction with the would-be robber: the desire to keep his dress blues clean.

When Task & Purpose asked Shoemaker if his blues slowed him down, he said, “That is 100% the reason we didn’t go to the ground, because I had my blues on.”

The Marine recruiters said that their experiences in that parking lot reinforced to them their mission and presence in the community. These Marines said that it was great for the Seattle community to see the character and values of the Marine Corps up close and personal.

“It definitely gives a different perspective people than we’re used to,” Schebesta said. “A lot of people don’t get to see how we help people, because we’re doing it in such far away places.”

Schebesta certainly knows a thing or two about offering help in faraway places. The nine-year veteran of the Marine Corps deployed to the Philippines to provide humanitarian assistance in the wake of a typhoon in 2009, and Japan to provide help after the fourth-largest recorded earthquake in world history and its ensuing typhoon-wreaked devastation there.

Twigg came to the recruiting field from the aviation community, an aviation supply specialist who has worked on F-18 Hornets at Marine Corps air stations in Beaufort, South Carolina, and Miramar, California.

Shoemaker is a decorated infantryman with multiple combat deployments to Iraq and Afghanistan.

The three Marines each come from vastly different corners of the Marine Corps experience, connected by their service as recruiters and now united in this story, one that has garnered national news coverage, including an interview with Fox & Friends on the Fox News Channel.

“I’m glad the public is able to see some direct good,” Twigg said.

Now, the men are back to work as recruiters, and they’re hoping the community they recruit from has taken note of their efforts.

“It’s very rewarding, one of the more rewarding jobs I’ve ever had,” Twigg said, of recruiting. “Every day, I go out on the street and seek to find my eventual replacement in the Marine Corps. The guy who will serve alongside me and eventually replace me.”