UNSUNG HEROES: This Marine Sniper And His Men Destroyed A Platoon-Sized Enemy Force 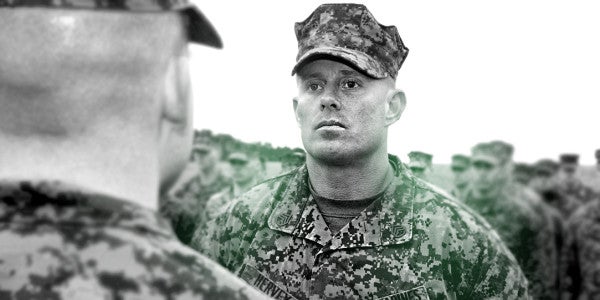 On May 21, 2011, Sgt. Nathan Hervey, a scout sniper section leader with 3rd Battalion, 2nd Marine Regiment, was deployed to northern Musa Qala, in Helmand province, Afghanistan. Hervey and his Marines were tasked with surveillance operations in the volatile district, when they became embattled in a heated firefight with insurgent forces transporting weapons that were to be used against a patrol base nearby.

Hervey’s sniper section was providing overwatch for a squad of Marines when he spotted the insurgents setting up an ambush, according to Marine Corps Times. Ordering his men to engage with sniper and machine-gun fire, the Marines began picking the enemy force apart.

As the gunbattle broke out, enemy reinforcements, armed with heavy machine guns, recoilless rifles, and rocket-propelled grenades arrived and brought their weapons to bear against the Marine patrol Hervey and his snipers were defending.

With the other Marine position beginning to deteriorate, Hervey moved his snipers north, personally sweeping for explosive devices as he searched for a better position from which to attack.

Bolstered with reinforcements, the insurgents began lobbing automatic grenade launcher rounds at them, and continued their heavy attack on the nearby Marines, who had been cut off.

“With the insurgents now in platoon strength, the sniper section began prosecuting multiple targets despite intense enemy fire in order to protect an isolated and exposed adjacent unit that had struck an improvised explosive device,” Hervey’s award citation reads.

Hervey began directing air strikes and indirect fire on the enemy position, and the subsequent barrage of ordnance destroyed the enemy’s heavy weapons, forcing them to flee.

The insurgent fighters routed, the Marines withdrew, but this was just one patrol and one engagement on a seven-month tour to a dangerous and deadly region.

“During that deployment, when Marines needed help, they unhesitatingly went forward just like any of us here wearing this uniform would have done, regardless of life, or limb or risk,” Harvey said of his fellow Marines in a Department of Defense press release.

For his actions that day, Hervey, now a staff sergeant and an instructor with the Advanced Infantry Training Battalion at the School of Infantry, was awarded the Bronze Star with “V” during an award ceremony on Feb. 5, 2016, at Camp Lejeune, North Carolina.

“This is the kind of leadership we want, setting the example when the chips are down and Marines need it most,” Maj. Gen. Brian Beaudreault, the commanding general of 2nd Marine Division, remarked in the press release.