UNSUNG HEROES: This MARSOC Marine Held His Ground Even After Being Wounded And Knocked Out 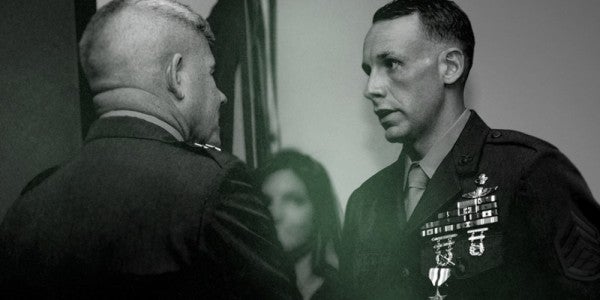 On Aug. 14, 2013 in Herat province, Afghanistan, Staff Sgt. Robert T. Van Hook, a critical skills operator with 2nd Marine Raider Battalion, took the fight to the enemy, and he didn’t hold back.

Under the cover of darkness, Van Hook led a Marine special operations team and a contingent of Afghan commandos into a small village nestled in a valley. The mission was to clear the town of Taliban fighters, ahead of an operation to engage the local leadership in the morning.

As the Marines and Afghan soldiers moved closer to their objective, they realized they weren’t alone. They were being shadowed by enemy scouts.

“The Taliban had gotten pretty smart to our tactical procedures so they had spotters that knew when we left the base and how we left, even at night,” Van Hook told Military Times. “As we left we started realizing, through what we call early warning, that they were basically sending signals throughout the valley that we were moving around.”

Van Hook noticed a pair of enemy spotters watching the patrol, and broke off with a small team, and headed down a small goat path, where they came across 10 insurgents staging an attack.

The Marines launched a hasty ambush of their own, immediately killing four and wounding two insurgents, according to a Department of Defense news release. The survivors ran, and one group took cover in a nearby compound. Van Hook and his team set off in pursuit and pressed the attack, clearing the compound with grenades.

After questioning and detaining the Taliban survivors, the Marines took up defensive positions inside the compound and waited for an Afghan National Army unit to arrive at dawn to meet with the village elders.

That morning, the meeting went as planned, but as soon as the Afghan National Army vehicles receded into the distance, the remaining Marines and Afghan commandos began taking fire.

What began as a series of small pot-shots, quickly devolved into a heated battle. A contingent of Marines and commandos were soon pinned down.

“They were taking fires from all sides and weren’t really able to tell where they were getting shot at from,” said Van Hook. “They called over to me, and because we had our pretty suppressed, I started focusing over to that position.”

Staff Sgt. Robert T. Van Hook was awarded the Silver Star for his actions during an operation in Herat Province, Afghanistan, on Aug. 14 and 15, 2013.U.S. Marine Corps Photo by Sgt. Donovan Lee

Van Hook manned a Mk-19 automatic grenade launcher on the compound’s roof and opened fire, pumping round after round of 40 mm grenades at the enemy. It wasn’t long before the Taliban focused their fire on the greatest threat, Van Hook and the Mk-19. Rocket propelled grenades rained down, and one exploded nearby, knocking him and another Marine unconscious, but Van Hook wasn’t done yet.

“I don’t know how long I was out, I came to, the Mk-19’s on top of me, there’s a puddle of blood underneath me, and I see the other guy kind of passed out right beside me, almost like you’re cuddling with your wife,” said Van Hook, who sustained a deep wound to his leg in the explosion.

Van Hook quickly triaged the injured Marine, who was bleeding from his back, and once that was done he flipped the Mk-19 over, untangled the ammunition, and went back to firing, pausing only to apply a tourniquet to his own leg.

With the amount of fire coming in, the rooftop was no longer safe, so Van Hook moved down from his position, and after coordinating a casualty evacuation for the wounded, called in a danger close 120 mm mortar strike.

As mortars exploded on enemy positions, the casevac arrived, and Van Hook mounted up with the wounded, leaving only after the fight had swung back in the Marines’ favor.

“Any Raider could have been switched out with me and done the same exact thing,” said Van Hook after he was awarded the Silver Star during a ceremony at Stone Bay on Marine Corps Base Camp Lejeune, North Carolina on Jan. 15, 2016. “A Raider isn’t going to let anybody down, not the brothers that went before him, not the Marine beside him. He might have done it differently, but he would have got the job done.”