UNSUNG HEROES: The Paratroopers Who Killed 265 Insurgents To Defend One Downed Apache 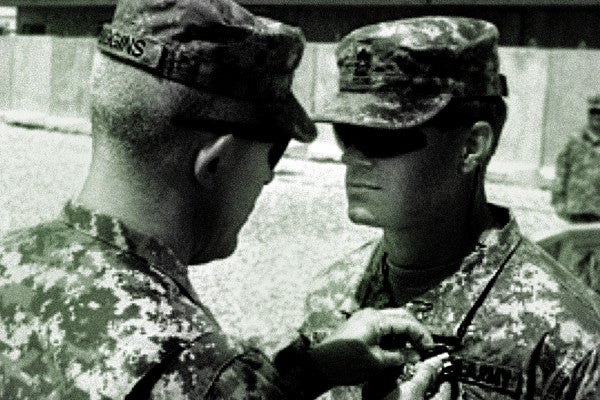 On Jan. 28, 2007, a 12-man Military Transition Team, or MiTT, composed of paratroopers from the 4th Brigade Combat Team (Airborne), 25th Infantry Division was called upon to assist an Iraqi army unit that was engaged in a fierce battle with insurgents near the city of Najaf.

The mission was to orchestrate close air support by communicating with the helicopters circling over the firefight. The battle had already claimed the lives of 10 Iraqi soldiers. But before the team made it to its objective, something happened: An AH-64 Apache helicopter plunged from the sky.

“When I saw the Apache go down, it immediately changed everything,” Master Sgt. Thomas Ballard, the noncommissioned officer in charge of the team, later told an Army reporter. “Everything was focused on that crash site; nothing else mattered. That’s where we had to go and that’s what we did.”

Ballard’s team had been told that the enemy force numbered somewhere between 15 to 20 insurgents, but upon reaching the crash site, they quickly realized that wasn’t the case. Suddenly, Ballard and his men found themselves engulfed in heavy machine-gun fire. A rocket-propelled grenade exploded nearby. Then the battle started.

“We began engaging, and continued engaging,” Ballard recalled. “Everything we shot was targets and collectively, we burned up about 11,000 rounds of machine gun ammo, M4 ammo, M203 grenade launcher ammo and 10 airstrikes.”

The insurgents, who apparently belonged to a religious cult called the Soldiers of Heaven, had “ungodly amounts of weapons,” and were maneuvering through a series of bunkers, trenches, and tunnels that encircled the area. The firefight raged for nearly three hours before backup arrived.

The enormity of the force Ballard’s team was up against didn’t come to light until the dust finally settled. An estimated 1,000 enemy fighters had been on the objective. Of them, 265 were killed; 400 more were captured.

All 12 men on the MiTT team were recognized for their actions that day, with each receiving the Army Commendation Medal with Valor. Later, Ballard’s award was upgraded to a Silver Star.

“Master Sgt. Ballard’s actions on the day of the fight and the following day were phenomenal,” recalled Maj. John Reed, the MiTT team’s operations officer, who took part in the battle. “His dedication to the mission, his disregard for the enemy threat, and his lead from the front attitude has been an inspiration to us all.”