UNSUNG HEROES: The Ranger Who Took A Grenade To The Face And Kept Fighting

On Jan. 5, 2010, the soldiers with the Army’s 2nd Battalion, 75th Ranger Regiment got a call to a compound … Continued 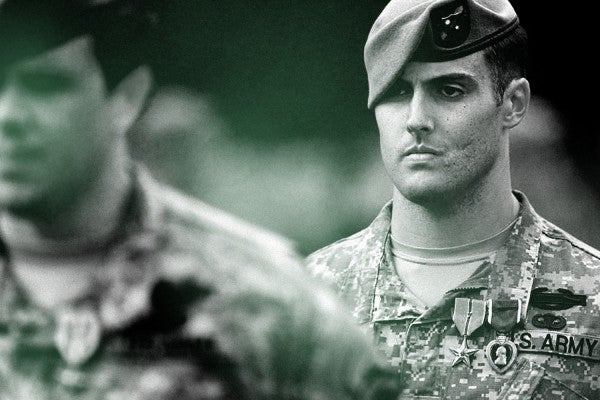 On Jan. 5, 2010, the soldiers with the Army’s 2nd Battalion, 75th Ranger Regiment got a call to a compound in eastern Afghanistan.

According to the Army’s account, the squad had received intelligence that the guest house inside was the hideout of a suicide bomber.

Staff Sgt. Austin McCall led his team into the compound to seek out the enemy and prevent an attack. He was the first to enter the guest house.

Inside, the suicide bomber sat with two live grenades in his hands, waiting.

It hit McCall in the neck, but the pin held firm and it didn’t explode. Instead it landed by his feet. Instinctively, McCall turned to his team and yelled “grenade!” as the second one, which was lying on the bomber’s chest, exploded.

Shrapnel flew in every direction, and one large piece of metal tore through McCall’s left cheek and and took two of his teeth as it exited.

“By turning my head and yelling ‘grenade’ to my Rangers, the shrapnel was able to go right through my face,” explained McCall. “It may have saved my life.”

McCall and the rest of the squad engaged the insurgents and were able to secure the compound and complete the mission.

When it was over, McCall’s uniform was soaked in blood. With no pain medication or medical care available, McCall waited a half hour before the helicopters were able to evacuate him.

He was treated at Bagram Airfield Base before being transported to Germany. Though he was sent back to the U.S. for further treatment, McCall returned to Afghanistan less than a month later.

For his valor that day, McCall received a Purple Heart and a Bronze Star with a valor device.

“It means a lot more to me than I could ever talk about, but what really means the most is that I'm a Ranger and my fellow Rangers are living with me in that compound and doing the things they do and living the Ranger creed,” McCall said.

During the combat awards ceremony June 10, battalion commander, Col. Mark Odom said, “The natural reaction is to seek cover his actions allowed the rest of his squad to enter the compound safely.”

He added that defining valor means knowing the difference between acts of self-preservation and true heroism, according to the Army release.