UNSUNG HEROES: The Army Reservist Who Saved 16 Soldiers 4 Days Into His Deployment 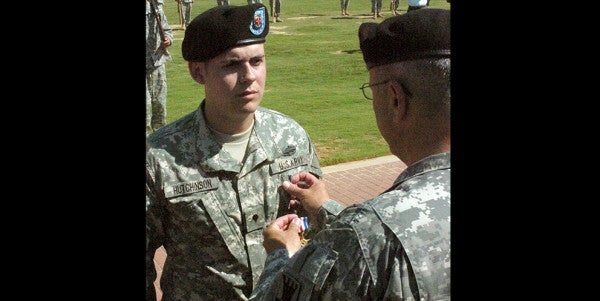 On May 21, 2008, Army Spc. David Hutchinson, a young Army reservist with the 420th Engineer Brigade, was manning a turret in a four-Humvee convoy when the unit was ambushed in Paktika Province, Afghanistan.

Hutchinson was from Humble, Texas, and had been in Afghanistan less than a week. The convoy was supposed to be a trial run — two hours there, two hours back — between Forward Operating Base Sharana and another nearby base, Orgun-E, according to a 2010 Stars and Stripes report. But that didn’t happen, and a deployment that was supposed to last 12 months was cut short after four days, ending in a violent and chaotic skirmish with insurgent forces.

The 17-man mounted patrol came under attack by a group of about 20 insurgents during a coordinated ambush just as the convoy entered the mountain pass, recounts a July 2009 article released by the Department of Defense. The attack was sudden and unrelenting. The convoy took fire from rocket-propelled grenades, AK-47s, AK-74s, sniper rifles and a PKM machine gun.

“I immediately started looking around, and two or three seconds later I saw several insurgents pop up on the right side of the convoy, which was my sector of fire,” said Hutchinson in a 2009 interview with Investor’s Business Daily.

At first emboldened by fire superiority and surprise, the insurgents' attack became blunted when Hutchinson returned fire from his Mk-19 grenade launcher. “To me, it was very obvious that one position had the most amount of fire coming from it, so I focused my firepower on that spot,” said Hutchinson, who determined that an enemy machine-gun position atop a nearby hill posed the greatest threat.

“Once that was destroyed, I started assessing other spots that had fire coming from them and I adjusted and fired at those positions,” said Hutchinson.

Hutchinson’s fire was so effective that the majority of attackers shifted their focus to him, and in the aftermath of the battle, soldiers counted more than 100 bullet marks and holes in his turret.

Hutchinson went through one full ammo can — all 100 rounds — destroying the enemy machine-gun position, along with five attackers before being injured by a rocket blast, which knocked him down from the turret and into the Humvee’s cab.

Once inside, Hutchinson saw his first sergeant was critically injured, having sustained wounds to his face and head. Though wounded himself and unable to climb back into the turret due to shrapnel wounds in his right leg and a temporary loss of feeling from his waist down, Hutchinson administered first aid to his fellow soldier, stopping the bleeding as the convoy moved out of the kill zone.

When the battle was over, Hutchinson refused to be carried to the evacuation helicopter on the unit’s single litter, insisting it be used for the first sergeant. This freed his fellow soldiers to provide security and reduced the amount of time that the helo was on the ground and vulnerable to enemy attack.

For his actions that day, Hutchinson received the Silver Star, the nation’s third-highest award for valor, for his courage and composure under fire. At the time of his award in June 2009, 22-year-old Hutchinson was just the fifth Army Reserve soldier to receive the Silver Star, and was invited to the White House along with a handful of other service members to celebrate the Fourth of July.

As he hobbled to the helicopter and was airlifted to safety, Hutchinson’s deployment came to an end. He was at war for just four days, but is credited with saving the lives of his 16 fellow soldiers.