UNSUNG HEROES: The Corpsman Who Ignored His Own Wounds To Save His Fallen Comrades From An IED Blast

On Jan. 1, 2005, the men of 4th Platoon, Small Craft Company, 1st Marine Division were ambushed while on patrol... 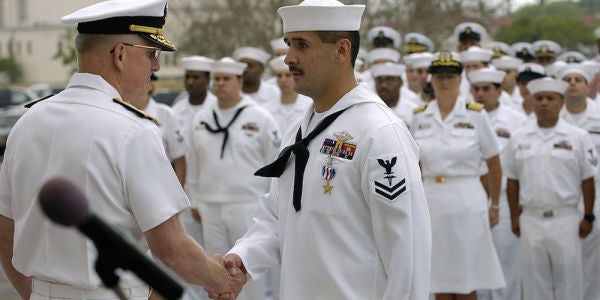 On Jan. 1, 2005, the men of 4th Platoon, Small Craft Company, 1st Marine Division were ambushed while on patrol along the Euphrates River in western Iraq. It was the quick thinking and valor of Petty Officer 2nd Class Juan M. Rubio, the unit’s Navy corpsman, that allowed three injured men to get medical attention in time, and brought together a unit in the midst of chaos.

According to Stars and Stripes, Rubio and 19-year-old Lance Cpl. Brian Parrello were patrolling an ambush site when an improvised explosive device detonated propelling both men into a wall with enough force that Rubio was knocked unconscious. Coming to just moments later, Rubio saw Parrello had taken the brunt of the blast and was critically injured.

The force of the blast that initiated the ambush was so powerful it broke Parrello’s rifle in half, another Marine told NPR in an interview.

With rocket-propelled grenades and machine gun fire erupting from the treeline encircling their position, Rubio quickly crawled to Parrello, dragging him out of harm’s way, reported Stars and Stripes. Employing his knowledge and skill to stem the blood flow, Rubio soon directed a Marine he had trained in combat lifesaving skills to watch Parrello and ensure the bleeding stopped so that he could assess other injuries.

Rubio, with the well-being of his fellow Marines in the forefront of his mind, exposed himself to the barrage of enemy fire and sought out three other severely injured Marines. One who required two tourniquets to stem arterial bleeding, another who had been shot in the hand, and lastly a Marine who had received multiple gunshot wounds to his leg.

Coaching the other able-bodied men, Rubio led them through the treatment of the other wounded, all the while bleeding out himself. Rubio then instructed the platoon to cover him as he and a few other Marines began to move the injured to the shoreline under heavy enemy fire. After cautiously and quickly loading the wounded aboard boats, they escaped the battlefield.

They caught Humvees three miles upriver, and quickly drove to a forward medical station where the wounded could receive further treatment until helicopters could take them elsewhere. After unloading the wounded, Rubio and the remaining Marines who had made the journey began to race back to the battlefield until someone noticed Rubio’s leg wound.

“The corporal who was driving slammed on the brakes,” Rubio said. “I flew from the back of the Humvee into the cab!” When Rubio made it to the hospital, he was told that he’d have to go back to the United States if he wanted all of the deeper, remaining shrapnel removed. Rubio jumped on a convoy to return to his unit only a day and a half later.

For his bravery, Rubio was awarded the Silver Star Medal on Apr. 27, 2006, aboard Naval Air Station Corpus Christi, Texas, according to a Navy press release. The Silver Star is the Navy’s third-highest honor for actions of valor in combat. Rubio was previously awarded a Purple Heart for the injuries he received that day.

During the ceremony, Marine Maj. Gen. Richard F. Natonski addressed Rubio with a message: “I talked to all the Marines and Sailors in Iraq before I left, and those back in Camp Pendleton, and they want me to tell you, ‘good job, and outstanding job! … They are damned proud of you.”

At the time, Rubio was only the third Navy corpsman to receive the Silver Star since the start of Operation Enduring Freedom and Operation Iraqi Freedom.

Rubio took the time to give merit to those who he said are the real heroes. Rubio identified his sons by name, and all children of service members. He lastly identified his hero as Lance Cpl. Parrello, who died shortly after that day’s engagement.

“Brian Parrello, this is for you, brother,” finished Rubio at the end of his award ceremony speech. “Thank you for bringing me home.”