UNSUNG HEROES: The Fallen Corpsman Who Took On A Special Mission To Save An Infant

In late June 2006, a routine insurgent patrol in Fallujah’s Anbar province turned into a different mission for Petty Officer … Continued 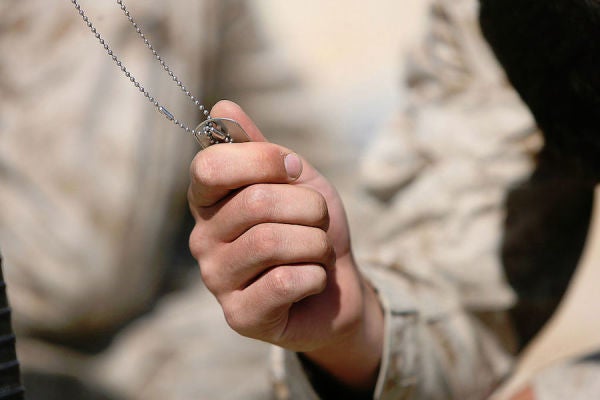 A hidden bomb went off during the sweep and Walsh, along with the rest of his platoon, set off to find the triggerman by going door to door in the nearest village.

From one of the houses, a woman emerged carrying an infant, alerting the Marines that she had a sick baby.

The child, known as “baby Mariam,” was born with a rare intestinal abnormality, called bladder exstrophy, where her bladder had developed outside of her body.

Though he had served as an EMT in his hometown of St. Louis, Walsh had never seen anything like this. He and the division took photos to send back to their base to determine how serious the condition was, and what needed to be done to save her life.

They knew she would need the kind of treatment that wasn’t available in her small village. Walsh decided right then that his new mission was to save baby Mariam, and his platoon — the 3rd Battalion, 24th Marine Regiment — vowed to help.

Each week when after dark, Walsh and a dozen Marines would drive Humvees within a mile of Mariam’s home, and walk there to treat a dangerous infection that could kill her.

According to the San Diego Tribune, Walsh told her family, who spoke no English but seemed to understand, “We're going to get her the help she needs.”

In the meantime, Capt. Sean Donovan, a doctor assigned to 1st Battalion, 25th Marine Regiment, attempted to find a way to get Mariam out of Fallujah for a life-saving surgery. He finally managed to make contact with St. Mary's Church in Chelmsford, Massachusetts, which helped Donovan connect with 16 companies that offered to pay for her trip.

Donovan then enlisted the help of Dr. Rafael Pieretti, a Venezuelan surgeon at Massachusetts General Hospital who specialized in the condition, and offered to perform the surgery pro-bono.

The only issue then was whether or not the team could keep Mariam alive long enough to make it to Massachusetts. She was one among thousands of Iraqis in need of transport and medical care.

Unfortunately, during another routine patrol on Sept. 4, Walsh’s Humvee encountered a roadside bomb that killed him and two other team members.

With their deployment nearly over, the remaining Marines decided the best tribute to their fallen comrades would be to ensure that baby Mariam survived.

That October, Mariam was flown to Boston.

When she and her grandparents — who went in her mother’s stead — were finally approved to go to the United States, Donovan sent a letter to Walsh's mother Maureen, who had no prior knowledge about the baby or her son’s role in saving her life.

Maureen got on a plane and flew to Boston, knowing she had to see Mariam.

“It made me feel like Chris was there,” she told ABC News. “He wanted something like this. He wanted to make a difference in somebody's life.”

The surgery was a success, and a malnourished Mariam gained two pounds shortly after recovering.

In the hospital, Maureen was able to hold Mariam, whose grandparents thanked her in Arabic for her son.

“There were too many coincidences for it to be coincidence,” she said. “Chris was waiting his whole life for something like this.”