UNSUNG HEROES: The Marine Who Carried 3 Men Out Of Harm’s Way Under Heavy Fire

On Nov. 11, 2004, during the Second Battle of Fallujah, Sgt. Aubrey McDade Jr., was on his second deployment in … Continued 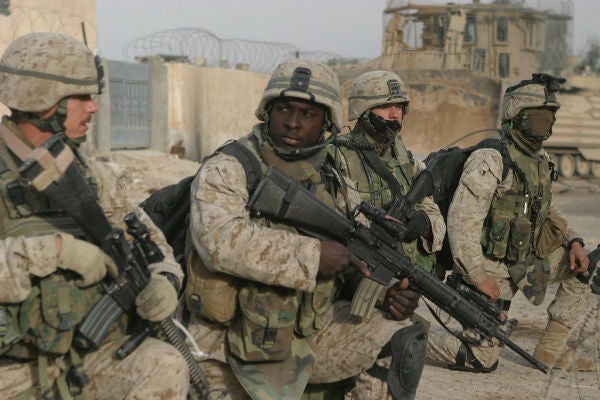 On Nov. 11, 2004, during the Second Battle of Fallujah, Sgt. Aubrey McDade Jr., was on his second deployment in Iraq as a machine-gun squad leader with 1st Marine Battalion, 8th Marine Regiment when his squad came under small arms and machine gun fire.

After taking immediate casualties McDade put himself at great risk to extract his fellow Marines from the line of fire, saving the lives of two men, according to a Marine Corps press release. As a result of his heroism, McDade was awarded the Silver Star, which he says was later upgraded to the Navy Cross at the recommendation of White House officials.

As McDade and his squad moved south into the city, McDade’s platoon entered an alley and encountered an “immediate heavy volume of small arms and machine gun fire” reads his citation. As three Marines fell, seriously wounded, McDade immediately rushed toward the kill zone and directed suppressive fire against the enemy.

The three wounded Marines were trapped under barrages of fire as repeated attempts to reach them failed. McDade abruptly told his platoon sergeant he would get them, he told Marine Corps Times in a 2007 interview.

“He just informed me that if I got hit he wasn't going to be able to help me right then,” said McDade. “I wasn't just going to let them sit out there like sitting ducks. They needed me, and I went.”

He ran into what he described as a “real hot” alleyway, with heavy fire flying around. Reaching the first injured Marine, McDade asked him to shed his gear, and began to haul him to safety.

“At first, he was on my shoulder, but there were a lot of rounds coming down the alleyway, so I kind of tossed him over,” McDade told Marine Corps Times.

McDade ran immediately back into the fray to retrieve the second casualty, who he quickly retrieved under heavy fire from the enemy.

McDade also pulled the third Marine from the alley, however, did not survive his injuries.

McDade then assisted with the treatment and extraction of the wounded Marines. “His quick thinking and aggressive actions were crucial in saving the lives” of the two Marines who survived, according to his citation.

“I feel like the recruit training process is probably the most important part of the Marine Corps,” McDade told the Marine Corps. “We have a unique opportunity to impact the Corps for the next 4-to-40 years.”

McDade told the Marine Corps Times he specifically uses what happened that day in Fallujah to help train his recruits.

McDade illustrates his remarkably humble attitude when speaking about accepting his award. “I didn’t need to be recognized for doing what I am supposed to do,” he told the Marine Corps press. “There are a lot of fallen Marines who did not get recognized for their actions and for me getting the award; I feel like I speak for everybody. I accepted my award for them.”

The Navy Cross is second highest award for valor in combat — second only to the Medal of Honor.