UNSUNG HEROES: The Soldier Who Evacuated His Teammates From Inside A Blasted Bradley 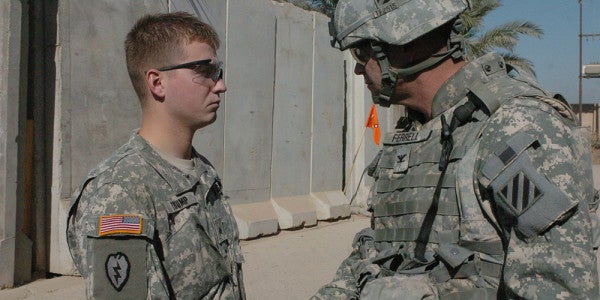 On July 24, 2007, a convoy of Bradley fighting vehicles with 1st Battalion, 30th Infantry Regiment, 3rd Infantry Division, were conducting reconnaissance operations in Maderiyah, Iraq, when they came to a fork in the road.

In war, it’s often better to act and risk the wrong choice, than to make no decision at all. But sometimes, there’s no good choice. Left? Right? It doesn’t matter.

When the driver of the lead vehicle, Pfc. John Elliot, came to the split in the road, he suspected there was an improvised explosive device to the right, so he went left. However, Elliot was in a no-win situation. Both paths were mined. As he maneuvered his vehicle toward what he thought was the safer route, the explosive device detonated.

The last thing Elliot remembers is the air being sucked out of his lungs and losing feeling in his right leg, below the knee, he said in a 2007 article by the Department of Defense.

Elliot’s teammates — Sgt. Michael Trump and their team leader, Staff Sgt. Mountain Robicheau — jumped into action. As Robicheau directed a second Bradley to tow the disabled vehicle, Trump opened the vehicle’s hatch and pulled Elliot out. He moved the wounded soldier to a safer location and tried to keep his spirits up, joking to Elliot, “You got yourself 35 promotion points,” a reference to a Purple Heart.

While Trump was treating Elliot, Robicheau guided a second Bradley into place near the disabled Bradley, setting off a second IED, which threw Robicheau into the air. Trump, who was safely outside of the blast era, rushed to Robicheau, disregarding the threat posed by any IEDs yet to be found.

“If you’re in a bad situation, you want someone to come and help you,” said Robicheau of Trump. “He did that.”

Robicheau was not critically injured, though he was unable to walk due to a number of torn ligaments in his ankle. After ensuring that both Robicheau and Elliot were stable, Trump turned his attention toward the badly damaged Bradley and began evacuating the soldiers trapped inside — two of them were seriously wounded.

In the aftermath, nine soldiers were injured with two evacuated to Walter Reed Army Medical Center and four sent to combat support hospitals in Iraq. The remaining three were treated by local doctors and medics.

For his actions that day, Trump received the Bronze Star for Valor on Nov. 22 of that year at Patrol Base Murray, in Iraq. During the ceremony, Trump, who is from Terre Haute, Indiana, shared a few humble words, saying, “During a time when help is needed, you can stand up. … Even in harsh conditions, you can still perform admirably.”