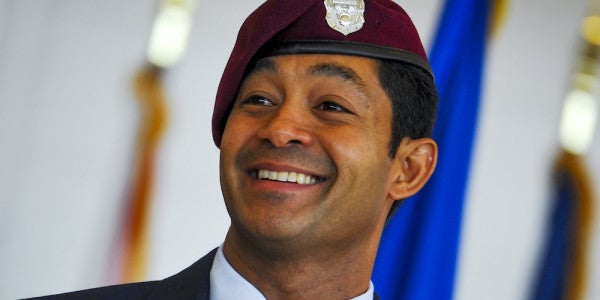 When Master Sgt. Ivan Ruiz saw two soldiers fall wounded amid a withering crossfire of enemy bullets and grenades in a courtyard in Kandahar, Afghanistan, he didn’t think twice about exposing himself to rescue them.

An Air Force pararescueman deployed with the 22nd Expeditionary Special Tactics Squadron, Ruiz and two Army Special Forces teammates were separated from the rest of the unit while moving through a series of compounds on Dec. 13, 2013. The next combatants they stumbled upon weren’t their comrades, but four insurgents at point-blank range in a courtyard. Ruiz and the soldiers quickly killed them, but the confrontation unleashed an onslaught of enemy fire from multiple directions.

Immediately, the two soldiers were wounded by incoming gunfire and grenades. Ruiz could have taken cover, but upon realizing that his teammates were exposed and unable to move, he ran back to their position through a torrent of enemy crossfire to defend them out in the open of the courtyard.

Facing the enemy alone, still separated from the rest of his unit, Ruiz returned fire to multiple enemy positions with his body flat on the ground to escape the blasts from grenades exploding just 15 feet away from him. Although the enemy was already at close range, Ruiz successfully kept the insurgents from maneuvering closer and finishing off the two wounded soldiers.

When reinforcements arrived, Ruiz dragged the wounded teammates to cover, and while wearing night vision goggles, immediately provided them with medical care credited with saving their lives.

In December 2014, Ruiz became only the sixth airman to receive the Air Force Cross since Sept. 11, 2001, that branch’s highest award for valor, second only to the Medal of Honor.

“Alone in the courtyard, Sergeant Ruiz completely disregarded his personal safety and refused to withdraw to cover,” reads a portion of his award citation quoted in The Washington Post. “Single-handedly suppressing enemy fire until reinforcements arrived, Sergeant Ruiz pressed ahead under intense enemy fire to reach his wounded comrades.”

Ruiz apparently has a knack for keeping his cool while exposing himself to extreme enemy fire to save his buddies. In September 2013 while assigned to the same squadron, Ruiz climbed a hillside and exposed himself to enemy fire to repel a succession of attacks and direct fire onto no less than eight enemy positions, contributing to 103 insurgent deaths. For his actions during that 13-hour battle, Ruiz was awarded the Bronze Star with a valor device in October 2014, according to another Air Force news release.

Ruiz simply sees his quick actions as reflections of superb training. “I didn’t really think I reacted,” he said, in the AFSOC news release on the occasion of his Air Force Cross. “Anytime something bad happens in my career, I just fall back on my training. It prepares us for what we can encounter when we are doing our work.”