UNSUNG HEROES: This Army Medic Overcame Gunfire And A Broken Leg To Save 14 Soldiers 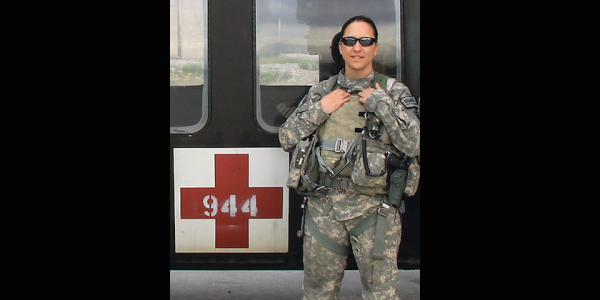 One brave medic who refused to quit even after fracturing her leg.

On June 25, 2011, Sgt. Julia Bringloe, with C Company, 3-10 General Support Aviation Battalion, was the medic for the four-person crew aboard a Black Hawk helicopter. The crew was one of two Army medevac teams tasked with supporting Operation Hammer Down in Afghanistan’s Watahpor Valley.

Bringloe’s job was to exit the helicopter — suspended from a cable when necessary — and recover the casualties, then provide them lifesaving treatment while the helicopter flew to a medical facility.

The team’s first day began with several typical rescues. The most challenging call was for the evacuation of an injured private in the village of Gambir, according to a November 2012 Newsweek article.

When the medevec team reached the village, the fighting was just too intense. Militants were firing at the rescue helicopters. Their sister chopper was hit by small arms fire and raced away for an emergency landing.

Meanwhile, other calls were coming in. The crew headed for a different rescue, hoping the situation in Gambir would be safer by the time they got back.

Their new mission required Bringloe to be lowered from 160 feet, amid a forest of 100-foot pine trees. Bringloe got her man, a severely dehydrated soldier, and hooked the two of them up for extraction.

As they were being hoisted, a gust of wind suddenly swung them like a pendulum. Bringloe saw that she and her patient were on a collision course with a large tree trunk. She swung her body around to protect her patient, and stuck out her leg to fend off the tree.

The impact was tremendous. Later Bringloe would learn that her leg had been fractured.

When Bringloe and the soldier were back inside the helicopter, the pilot observed her injury and asked if she wanted to quit. “I never thought it was an option,” Bringloe told The Daily. With the other helicopter out of commission, “I was the only medic in the valley and it was a huge mission.”

Unfazed, the team dropped off their patient and returned to Gambir. It was too dark now to lower Bringloe, and there were too many trees to land on the ground. The pilots realized their only option was to hover the chopper on the roof of a hut. With fighting still going on around them, Bringloe and another soldier leaned out the window to direct the pilots to alight on the small roof.

Once the Black Hawk was in place, Bringloe hopped out and called for the injured man to be brought aboard. One look at the man convinced her that they had come too late, she told Newsweek. Nevertheless, she got to work on him and saved his life.

The next two days were filled with more gunfire and more dramatic rescues. One call was for the team to retrieve an Afghan translator who had been shot. The helicopter hovered some 70 feet above the casualty site, even though there were half a dozen insurgent fighters on a nearby mountainside. Bringloe was lowered to the ground and greeted with gunfire.

“Medevac, you guys are crazy!” called a nearby soldier.

The translator’s body was hoisted first. Then it was Bringloe’s turn. An Army account continues, “Despite the chaos around her, she didn't hesitate in her job, securing herself and instructing her crew to continue with her own extraction.”

“For about 15 seconds, “ her pilot recalled to The Daily, “those six dudes popped up and fired at her.”

“As I was getting pulled up, I took some fire,” Bringloe told Stars and Stripes. “It’s one of those things you don’t think about while it happens. You are pretty focused on your patient and getting the mission accomplished. Everyone is in danger.”

The bullets missed, and Bringloe made it back into the chopper.

The team wasn’t done yet. On their very last flight of the marathon three days, Bringloe was lowered to retrieve a soldier who had been shot in the shoulder. As she found him, thick clouds rolled in. She could no longer see the helicopter at the end of the line. Worse, the pilots couldn’t see anything, including the mountains and cliffs that surrounded them.

“It’s like driving a car 100 miles an hour and all you can look at is the speedometer,” one pilot recalled to The Daily. “We had to make sure we didn’t slide into a mountain sideways.”

It was a fitting end to three tumultuous days. “There were so many missions that would have, on any other day, qualified as the craziest mission we'd ever seen,” one of the pilots commented to Army Times.

For her actions during June 2011, Julia Bringloe received the Distinguished Flying Cross. Pilots Erik Sabiston and Kenneth Brodhead also received the award. Bringloe was the seventh woman in U.S. history to receive the award, and only the fourth for combat. Their mission was named the Air/Sea Rescue of the Year by the Army Aviation Association of America, and Bringloe was the USO Army Woman of the Year for 2012.

“To have these awards, to be recognized for the missions, is great, but I didn’t fly with my own two arms,” Bringloe reflected to Stars and Stripes. “I had a whole crew and medevac company that have supported me.”