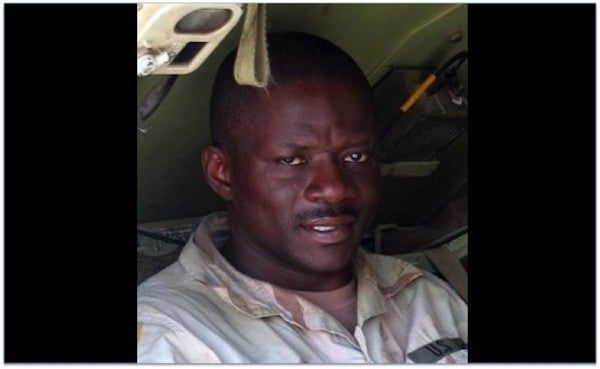 On Oct. 17, 2005, 35-year-old Army Sgt. 1st Class Alwyn Cashe was one of the few soldiers in his unit to escape his burning Bradley Fighting Vehicle after it was struck by an improvised explosive device. The enemy was now targeting the blast site with small-arms fire, but instead of taking cover and tending to his wounds, Cashe went back into the roaring inferno to rescue his trapped comrades — over and over again.

While on patrol in Samarra, Iraq, the IED explosion ignited the lead Bradley vehicle’s fuel cell, spewing fuel all over Cashe in the gunner’s hatch, according to the U.S. Army’s account of the incident. Initially sustaining only light injuries, Cashe extricated himself from his hatch, assisted the driver to escape the vehicle, and extinguished the flames on the driver’s body.

However, the blast had left the vehicle entirely engulfed in flames, and six American soldiers and an Iraqi interpreter were still inside. Here is an excerpt from Cashe’s Silver Star citation:

Without regard for his personal safety, Sergeant First Class Cashe rushed to the back of the vehicle, reaching into the hot flames and started pulling out his soldiers. The flames gripped his fuel soaked uniform. Flames quickly spread all over his body. Despite the terrible pain, Sergeant First Class Cashe placed the injured soldier on the ground and returned to the burning vehicle to retrieve another burning soldier; all the while, he was still on fire.

Cashe helped remove all six soldiers, still alive, as well as the interpreter’s body, while additional soldiers arrived on the scene to witness his heroics. A testament to Cashe’s tremendous sacrifice was the fact that he initially escaped the vehicle with slight injuries but left the scene with worse injuries than the comrades he saved; 72% of his body was covered in second- and third-degree burns. Cashe died from his wounds on Nov. 8, 2005.

Following witness statements from soldiers who survived the ambush, Cashe’s commanding officers in the 1st Battalion, 15th Infantry Regiment, 3rd Infantry Division are still petitioning for him to receive the nation’s highest award for valor, the Medal of Honor. They have emphasized that the Silver Star citation doesn’t mention that Cashe was under enemy small-arms fire throughout the rescue, compounding the dangers he faced from the heat and flames, the New York Times reported.

“It was later determined that the event was actually a complex attack with soldiers combating both an I.E.D. strike and enemy small-arms fire,” wrote Col. Gary Brito, Cashe’s battalion commander, in a 2009 letter to Florida Sen. Bill Nelson. “This clearly distinguishes his service and this act as deserving of the Congressional Medal of Honor.”

Another letter from the 3rd Infantry Division’s commanding general asserted that in his 40 years in the military, “I cannot remember a story that is its equal.”

Cashe’s heroism on that October day was a reflection of the way he treated his soldiers on a daily basis. “You’ll get an NCO who will do his job as a platoon sergeant or section leader or squad leader – that’ll happen,” said Brito. “Because you’re wearing an Army uniform, you do your job. But, some, because they care for their soldiers, will go above and beyond. I could see that in Sgt. 1st Class Cashe.”