UNSUNG HEROES: This Corporal Died Leading His Marines Until The Very End 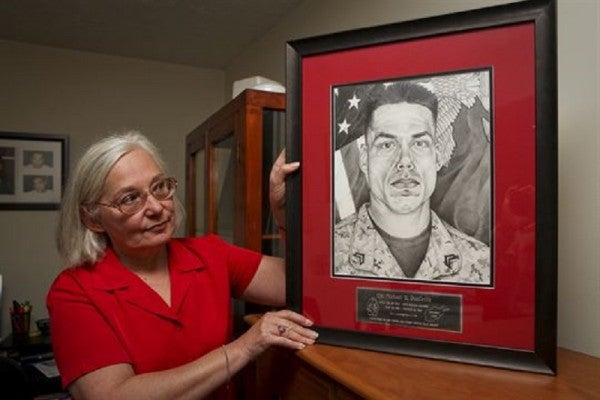 On March 22, 2009, Cpl. Michael W. Ouellette, 28, was leading his squad on a foot patrol in the Now Zad district of northern Helmand province, Afghanistan, when an improvised explosive device detonated beneath his feet.

The ensuing blast severed his left leg, and peppered his body with shrapnel, according to The Marine Corps Times. The explosion was the precursor to what would have been an even deadlier ambush, had Ouellette not acted as he did.

As the Marines of 1st platoon regained their bearings and began returning fire, Cpl. Jesse Raper, an M249 SAW gunner, pulled Ouellette, who was still conscious, from the crater left by the blast. Though severely wounded, Ouellette helped Raper and the squad’s corpsman, Petty Officer 3rd Class Matthew Nolen, apply tourniquets to his wounds.

All the while, Ouellette remained in control of the situation, Nolen told the Marine Corps Times.

Knowing he had no time to waste, Ouellette calmly took command of his squad and began directing his Marines’ fire while instructing his radio operator on how to call in for his own medical evacuation.

Caption: A photo of Cpl. Jesse Raper’s wrist shows a black band memorializing Cpl. Michael W. Ouellette, who died during combat operations in Helmand province, Afghanistan, March 22, 2009.As the fight unfolded, a quick-reaction force made its way toward the ambush site, but was hampered by additional roadside bombs along their route.

Ouellette continued to direct his men, urging them on while they awaited reinforcements. As his Marines returned fire, Ouellette called for air support, and when Marine Corps AH-1 Cobra attack helicopters arrived overhead, he provided precise and accurate directions for a danger-close strike within 20 meters of the Marines’ position.

Though Ouellette later succumbed to his injuries, his composure under extreme pressure and duress thwarted the attack and protected his Marines. For his heroism, Ouellette was posthumously awarded the Navy Cross, the nation’s second highest award for valor, behind only the Medal of Honor.

As their reinforcements arrived, the enemy broke contact with the Marines’ position and withdrew.

Cpl. Jesse Raper, shared a hug with Donna Ouellette, the mother of his fallen squad leader, Cpl. Michael W. Ouellette, moments after she was presented with her son’s Navy Cross in ceremony Nov. 10, 2010.Even as he was loaded into an ambulance, Ouellette continued to give instructions to his Marines, before being taken to a casualty evacuation site about two kilometers away. Nolen, who was with him, recalled that Ouellette’s last words before the evacuation chopper took him away, were: “I'm proud of my Marines.” Ouellette died of his wounds on his way to base.

“From the moment the Marines knocked on my door to inform me of Michael’s death, it’s like the Marine Corps wrapped a warm blanket around me and never took it back,” said Donna, who met with the Marines Ouellette served alongside and led that day. “It gives me comfort knowing that these were the men he served with. It’s like they’re my new adopted sons now.”

Raper, who was at the ceremony, said that Ouellette’s memory is still very much alive and that his legacy lives on in the example he set for those who knew him.

“He’s not a distant memory to me,” said Raper. “He’s a very important part of my life. His story is very precious to me and should continue to live on. It reminds us (Marines) who we are.”