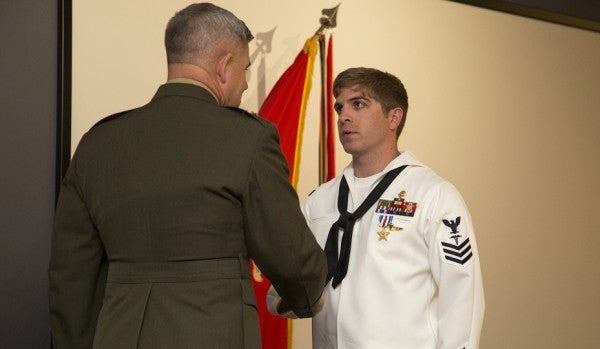 On April 25, 2013, Petty Officer 1st Class Kevin D. Baskin, a Navy Corpsman, with 3rd Marine Special Operations Battalion, set out with his team on a mission to the Kushe Village in Herat province, Afghanistan.

Baskin’s team began taking sporadic fire as soon as they reached one of their checkpoints, according to a March 2015 Department of Defense article. The team identified two separate groups of attackers moving into fighting positions, and as the mission continued, Baskin’s team became pinned down down behind a cemetery wall.

“Another teammate ran to our position with the 60mm mortar and started sending rounds down range,” said Baskin. “When he ran out of rounds for the 60, he left the cemetery to another wall about 50 meters in front of us. When he looked up to try and suppress the enemy, he was shot.”

Without hesitation, Baskin ran to the man’s side and began providing desperately needed first aid. Baskin stabilized the wounded Marine and directed his evacuation.

That’s when Baskin was shot in the back.

Injured, with one man down and still taking accurate fire, Baskin turned his attention to his attackers and fired back in earnest. As Baskin began suppressing the enemy positions, his teammates were able to evacuate the kill zone. His actions are credited with saving the lives of four Marines.

For his bravery under fire, Baskin was awarded the Silver Star, the third-highest award for valor, during a ceremony at Marine Corps Base Camp Lejeune, North Carolina, on March 20, 2015. He also received his second Purple Heart. On a previous deployment with 2nd Marine Special Operations Battalion, Baskin was hit by a rocket-propelled grenade and evacuated to U.S. Naval Hospital in Bethesda, Maryland, where he worked for eight months while recuperating.

“I am proud to be receiving an award like this,” said Baskin. “I felt like I was just doing my job … what anyone else on the team would have done if put into the situation. It’s a very surreal feeling.”

“If you look across battlefields throughout history, there is always that one ringing slogan that you see and hear throughout and that is, ‘Corpsman up!’” said Osterman. “HM1 (Baskin) went forward without thought of himself, to the point of protecting his fellow Marines with his own body. From a personal perspective, I appreciate who he is as a man, from how he takes care of his family to the quiet professional that he epitomizes.”