U.S. and British warships have sailed together in the disputed South China Sea for the first time, in exercises likely to stoke anger in Beijing.

The guided-missile destroyer USS McCampbell and Royal Navy frigate HMS Argyll conducted the operations in the strategic waterway over a period of six days from Friday through Wednesday, the The U.S. Navy's 7th Fleet said in a statement.

The statement said the warships "conducted communication drills, division tactics, and a personnel exchange designed to address common maritime security priorities, enhance interoperability, and develop relationships that will benefit both navies for many years to come."

The joint exercises in the waters — the first since China built military bases there — come as the British Navy seeks to play a bigger role in the region and has dispatched the Argyll on a tour of Asia.

A U.S. Navy spokesman said there was "no record in recent history of operations together, specifically in the South China Sea," Reuters reported. 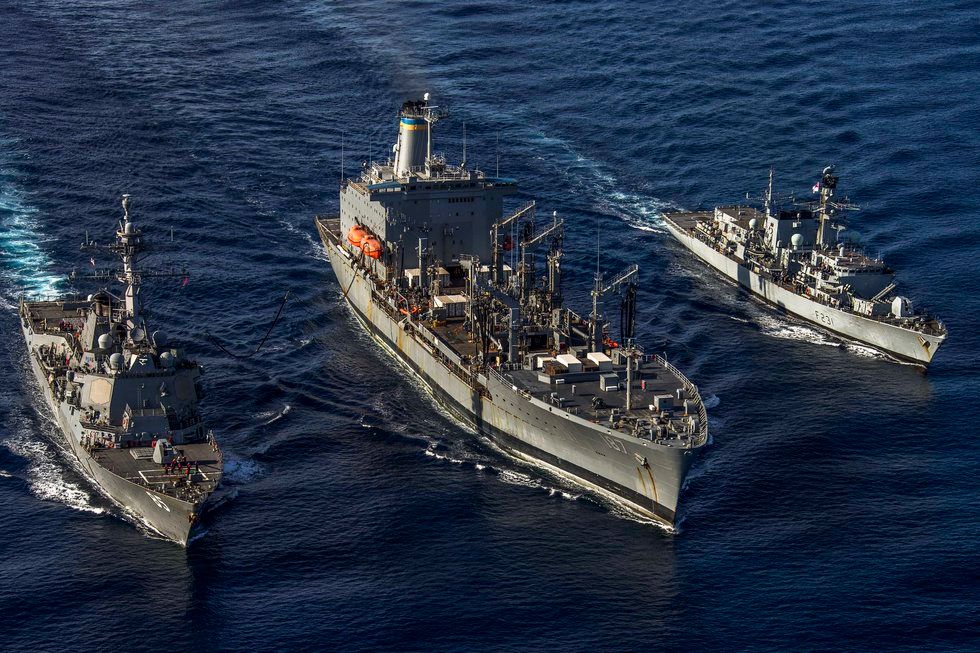 Beijing has constructed a series of military outposts throughout the waterway, which includes vital sea lanes through which about $3 trillion in global trade passes each year. The Philippines, Vietnam, Malaysia, Taiwan and Brunei have overlapping claims in the waters, where the U.S., Chinese, Japanese and some Southeast Asian navies also routinely operate.

China says its facilities in the waters are for defensive purposes, but some experts say this is part of a concerted bid to cement de facto control of the waters.

"Professional engagement with our British counterparts allows us the opportunity to build upon our existing strong relationships and learn from each other," she said.

The move comes on the heels of a trilateral anti-submarine warfare exercise between the U.S. Navy, Royal Navy and the Maritime Self Defense Force on Dec. 21-22 and after another British warship, the HMS Albion amphibious assault ship, conducted a so-called freedom of navigation operation near the contested Paracel island chain claimed by China in the South China Sea last August.

Beijing blasted London over that operation — the first in which Britain had directly confronted China over its claims in the waters, accusing it of engaging in "provocation."

Washington — which has led the charge in challenging what it says are excessive maritime claims in the waters — has long urged boosted participation in such operations.

Earlier this month, the McCampbell passed within 12 nautical miles (22 km) of the same island chain in the U.S. Navy's latest FONOP. Just a day after that operation, Chinese state-run media announced that Beijing's so-called carrier killer anti-ship missile had been deployed to the country's northwest. While the actual deployment date of the DF-26 ballistic missile, which reportedly has a range of 3,000-4,000 km, was not mentioned, the report alluded to the U.S. operation, quoting an unidentified expert as noting that it served as "a good reminder that China is capable of safeguarding its territory."

"Even when launched from deeper inland areas of China, the DF-26 has a range far-reaching enough to cover the South China Sea," the expert added.

WATCH NEXT: FONOPS Are Not Fun Ops news china south china sea u.s. navy royal navy how the other half fights
until everyone comes home