Extending the lifetime of Arlington National Cemetery will likely require further restrictions on which service members and veterans are eligible... 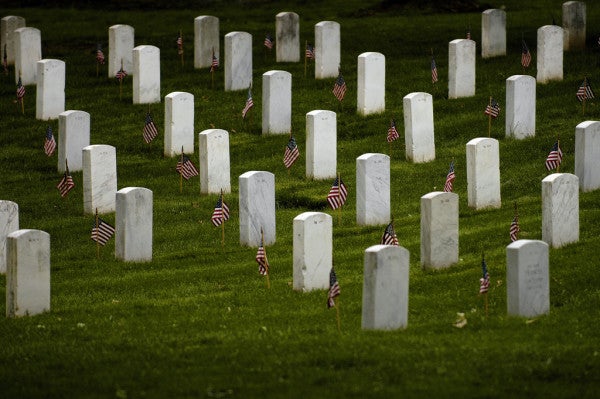 Extending the lifetime of Arlington National Cemetery will likely require further restrictions on which service members and veterans are eligible for burial there, the Army wrote in a report released to Congress.

Tightening the eligibility requirements — already the strictest of any national cemetery — is one of several options that the Army outlined in its report, which asks Congress, veterans organizations and the departments of Defense and Veterans Affairs for urgency in making decisions about changes to eligibility or the size of the cemetery. Arlington is expected to reach capacity in about three decades if nothing changes, meaning most veterans from recent wars wouldn’t have the option to be buried there.

“Arlington National Cemetery is at a crossroads,” reads the report released Thursday. “When one thinks of ANC, it is natural to envision it stretching on forever – not only in physical space, but in time. The truth is that ANC is running out of space. ANC and those it exists to serve must… confront the reality that, at some point in the near future, the cemetery will no longer continue to operate as it does today.”

The Army, which manages the cemetery, has warned of space issues for years. Demand at Arlington is higher than at the 135 national cemeteries managed by the VA. Approximately 400,000 people are buried at Arlington, and it conducts about 7,000 funeral services each year. Even with the opening of a 27-acre expansion this fall, the cemetery is expected to reach capacity in the early 2040s.

Congress passed legislation last year requiring the Army to produce the report provided Thursday, which cemetery officials said they hoped would start a national dialogue about the cemetery’s future.

The report lists seven options for changing eligibility requirements at Arlington, the most stringent being to allow only Medal of Honor recipients and servicemembers killed in action. Officials anticipated the change would allow Arlington to remain active for the next two centuries.

The cemetery now inters approximately 200 servicemembers killed in action or on active duty each year, and fewer than 800 servicemembers have received the Medal of Honor since World War II.

Cemetery officials are anticipating backlash about the idea, stating in the report that some of the ideas to tighten eligibility would “exclude a large number of veterans,” “disenfranchise certain veterans’ groups” and “be viewed negatively by the public.”

The cemetery is now open to servicemembers who die while on active duty, retired military and certain other veterans and family members.

“[T]he status quo is not a viable option if the goal is to extend ANC as an active cemetery well into the future,” the report reads.

In a statement Thursday, the Army wrote it had not chosen a preferred option for how to extend the cemetery’s use. But in the report, it called one of the eligibility changes the “most feasible, acceptable and suitable.”

The option calls for stricter criteria for in-ground burials while maintaining eligibility for above-ground inurnments as it is now. For example, in-ground burials could be restricted to servicemembers killed in action, who die on active duty or receive certain awards, while above-ground services would remain open to veterans who meet length-of-service requirements, according to the report.

Officials estimated the option would allow the cemetery to remain active until the middle of the next century.

Under law, the Secretary of the Army has the authority to decide most eligibility requirements for Arlington, and changing eligibility wouldn’t require legislation, according to the report.

Army officials presented additional options to help with space limitations, including prohibiting any future use of cemetery space for erecting monuments. That change would require legislation.

Cemetery officials are also seeking a southern expansion of the cemetery. During a congressional hearing in March, Karen Durham-Aguilera, director of Army National Military Cemeteries, showed lawmakers a site that would create approximately 40,000 to 60,000 new gravesites. It would extend Arlington as an active cemetery into the 2050s, she said at the time, but will require various land acquisition deals and approximately $274 million.

Another option in the report is for Congress to establish an entirely new cemetery, separate from Arlington and managed by the Defense Department.

“This would mean building a new cemetery in a suitable place that would offer the same burial honors as ANC,” the report reads. “While it is impossible to recreate the aesthetic appeal and history of ANC, this new cemetery could grow to become iconic over time, in the same way that ANC has gradually evolved over the past 150 years.”

Creating a new cemetery would take decades, the report states, and work would need to start soon, or else it would not be established by the time Arlington ran out of space.

Cemetery officials also offered the idea of “green burials,” where a tree is planted above a burial site, to save capacity. In the report, Army officials asked Congress to support and fund a study between the Defense Department and VA to gauge veterans’ interest in nontraditional burials.

Instead of asking Congress and veterans organizations to choose one option to extend the use of the cemetery, the Army is proposing several changes implemented in a phased approach.

“The most effective course of action could be a hybrid of multiple options introduced over time,” the report reads.

In one example, the cemetery would – during the next three years — prohibit monuments, begin a southern expansion and tighten its eligibility, and allow above-ground inurnments to veterans who served two years of active duty. It now allows inurnments for any honorably discharged veteran who served one day of active duty service. More eligibility restrictions and land acquisitions would be added in two more phases during the next 10 to 20 years, in that example.

The cemetery’s report asks for public meetings where veterans organizations can offer their feedback. The Army also wrote it sought support from Congress and Defense Secretary James Mattis “as difficult eligibility decisions are debated.”

“More dialogue and engagement are needed over the coming months and years,” the report states. “Discussion on these options and courses of actions should continue at a series of open meetings.”

It was uncertain Monday when a public meeting about the cemetery would be held, but the report expounded on the need to act quickly.

“If the American people wish to preserve it as an active burial ground, we must act quickly and decisively to shape the future direction,” the report states. “Every day and every year that passes without a decision brings the cemetery closer to capacity.”