Even in its beginnings, the Department of Veterans Affairs was seeped in wrongdoing. In 1926, just five years after the... 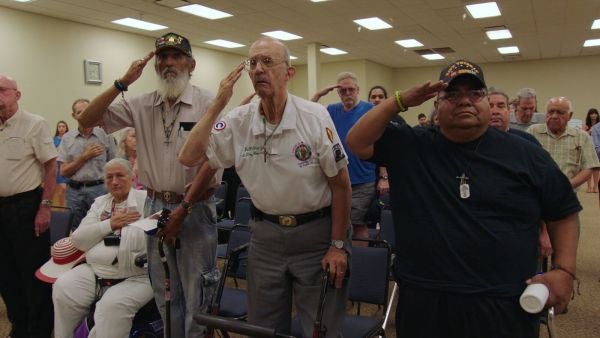 Even in its beginnings, the Department of Veterans Affairs was seeped in wrongdoing. In 1926, just five years after the establishment of the U.S. Veterans Bureau, founding director Col. Charles R. Forbes was convicted of trying to defraud the government. More than 90 years later, the VA remains a government agency wracked in controversy as it tries to balance the treatment of roughly 9 million veterans and stifling government bureaucracy.

The history of the VA and its failures are the focus of VA: The Human Cost of War, a new documentary set to air Nov. 6 on PBS. Directed by Emmy Award-winner Ric Burns, the film delves into the evolving role of the modern VA in its near-century of operations and the services that remain engulfed in systemic dysfunction as the agency struggles to provide much-needed care for millions of veterans across America.

Dr. David Shulkin, Secretary of the U.S. Department of Veterans Affairs, speaks with a patient at the VA hospital in New York City.Steeplechase Films

“The film illustrates the true cost of war through the enormous sacrifices and subsequent neglect of those who serve in our armed forces,” Lois Pope, executive producer of the documentary, said in a statement. “But as we have far too often seen in recent years, there has been an abundance of negligence when it comes to ensuring their care and well-being. This film is meant to raise awareness and create an open, candid dialogue addressing this situation.”

Featuring a wide ensemble of interviews — current Secretary of Veterans Affairs Dr. David J. Shulkin and his predecessor Robert A. McDonald, VSO leaders and journalists who work to hold department accountable, and the veterans who rely on the VA’s services — the documentary offers an honest, unflinching critique of the institution. But it also recognizes that not all of the VA’s shortcomings are within its control: As the film points out, long-term, overarching improvements require lawmakers to do more in Congress to equip the VA with the tools it needs to succeed, rather than point fingers when things go wrong.

Most importantly, the film elevates the individual stories and experiences of veterans who signed a contract with the U.S. government to protect our country and came home broken and in need of repair. Many of these veterans indeed received life-saving treatment from the VA, which trains roughly 70% of doctors and nurses in the United States and has spearheaded innovative medical solutions to the injuries coming out of America’s wars. But too many are falling through the cracks — and will continue to do so until some drastic changes are put into effect.

PBS will screen the one-hour documentary Monday at 9 p.m. EST; in the meantime, you can watch a clip below. Tell us in the comments what you think.