A group of bipartisan senators with a history of work on veterans issues have introduced comprehensive legislation aimed at reforming... 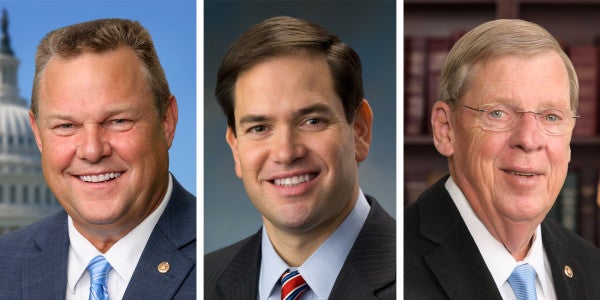 A group of bipartisan senators with a history of work on veterans issues have introduced comprehensive legislation aimed at reforming the Department of Veterans Affairs’ accountability procedures.

This new measure, sponsored by Sens. Johnny Isakson, a Republican from Georgia; Marco Rubio, a Republican from Florida; and Jon Tester, a Democrat from Montana, would allow poorly performing VA employees to be more easily terminated, and allow for the government to recoup bonuses paid to those employees.

It would also give the secretary of the VA the authority to reprimand or fire a VA executive in a “21-day internal department grievance process.” Other VA employees would have a review process of no more than 180 days. From Military Times:

“The legislation also includes language which would allow VA leaders to claw back employee bonuses or relocation expenses, or reduce a former employee’s pension, if they are convicted of a felony related to their job. VA leaders in recent years have maintained they have no current authority to take those kinds of punitive actions.

Under the bill, VA leaders would be required to provide more training on whistleblower rights and be prohibited from firing employees who have filed complaints through official channels.”

“To fully reform the VA and provide our nation’s veterans with the quality care they were promised and deserve, we must ensure the department can efficiently dismiss employees who are not able or willing to do their jobs,” Rubio said in a statement on May 11. “We must make real changes that put the well-being of our service members before the best interests of bureaucrats.”

This could be easier said than done, as a federal appeals court recently struck down legislation that shortened the appeals process for senior VA executives, ruling that it violated those workers’ protections.

The proposed legislation “represents lawmakers’ best chance at sweeping department reforms since the wake of the 2014 VA wait times scandal,” according to Military Times.

That scandal rocked the veterans community and led to the resignation of retired Army Gen. Eric Shinseki, then the VA secretary. A big part of the issue that led to the scandal was the VA’s limited ability to fire poor employees.

“This bipartisan bill will hold bad employees accountable while protecting the hardworking folks who are responsible for serving veterans,” said Tester, ranking member of the Senate Veterans' Affairs Committee. “The challenges at the VA are many, but tough problems require commonsense solutions and this bipartisan bill is a product of what happens when you put aside politics and work together.”