Since 1954, when then-president Dwight D. Eisenhower renamed Armistice Day as Veterans Day, the Nov. 11 federal holiday has been... 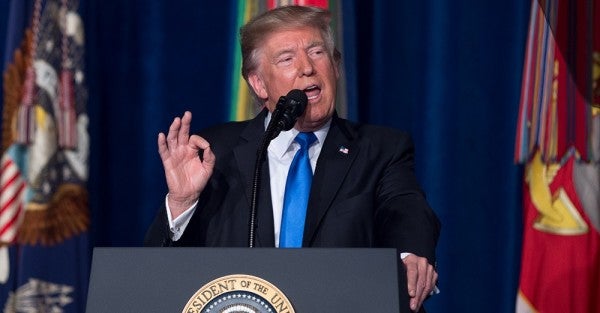 Since 1954, when then-president Dwight D. Eisenhower renamed Armistice Day as Veterans Day, the Nov. 11 federal holiday has been an opportunity for Americans to reflect on the sacrifices made by military service members — living or dead — in both war and peacetime. And in recent years, it’s provided ample opportunity for active-duty military and veterans to binge eat at chain restaurants, where patriotism flows like the free soda and cheap appetizers. Oh and there’s usually a bunch of parades, public services, solemn reminders of sacrifice, and a deluge of introspective coverage from the media.

Now the holiday is getting a major upgrade from a single day to a whole month — sort of. At a closed Nov. 1 ceremony at the White House, President Trump declared the month of November National Veterans and Military Families Month, saying that it was “our patriotic duty to honor veterans and military families.” November has been dedicated to military families since 1996, but now vets are getting a whole month. What, oh what will we do come December?

To honor those who “have borne the battle,” as Trump (quoting Abraham Lincoln) put it, the administration has tasked the Department of Veterans Affairs with instituting a number of observances and events throughout November, though a few are already underway and have been for quite some time.

“Every day of the month there will be an event celebrating our veterans and service members,” Veteran Affairs Secretary David Shulkin told reporters, Military Times reports. “We’re going to be announcing new ID cards for veterans across the country. We’re going to be introducing the 24/7 White House veterans hotline the president talked about in his campaign.”

News of the new veterans ID cards broke in October, with the application process opening this month. And, if we’re keeping count, the White House Veterans Complaint Line was set up June 1, though based on emails to Task & Purpose from veterans attempting to use the hotline, the results have been mixed. Several readers reported long waits on hold, and few responses after submitting a complaint.

Additionally, the VA has scheduled events throughout the month, including veteran visits with NFL teams, programs on suicide prevention, and remarks from Shulkin at Arlington National Cemetery on Veterans Day. A full list of the events can be found on the VA’s website.

There’s no word on whether nation-wide retailers and chain restaurants have rogered up to extend their discounts for the whole month, so if you’ve got a checklist of cheap and free eats, you may have to wait until Nov. 11 to start scratching those off.