The Department of Veterans Affairs handed out more than $30 million in employee incentives in one year without justification, and … Continued 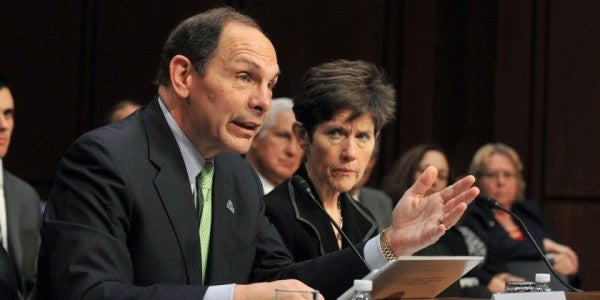 The Department of Veterans Affairs handed out more than $30 million in employee incentives in one year without justification, and it will continue to overspend if changes aren’t made, according to a report released Thursday by the agency’s internal watchdog.

The findings are the result of an investigation by the VA inspector general’s office into how the department was using funds to attract and retain employees. Inspectors initiated the investigation after allegations that the department was giving out too many incentives to VA executives without cause – a charge Republican lawmakers and VA leaders have quarreled about in recent years.

“The VA has limited assurance that it is using incentives effectively and strategically to acquire and retain talent,” the inspectors’ report stated.

Inspectors found $30.7 million of $66 million spent in fiscal 2014 to recruit, relocate or retain employees was not fully justified. At that rate, they estimated the VA could give out $158.7 million in unsupported incentives through September 2019. Inspectors concluded VA officials did not always confirm the incentives were being used to help fix workforce gaps or were necessary to recruit and retain employees.

The VA also failed to recoup about $784,000 of incentives that were awarded on conditions that employees then did not meet. Inspectors estimated the VA could fail to collect another nearly $4 million through fiscal 2019.

Meghan Flanz, acting assistant secretary for VA human resources and administration, responded to the report by saying her office has started to take corrective measures and the department has already updated some of its procedures and internal controls to avoid giving out incentives haphazardly.

The findings were issued about two weeks after Deputy VA Secretary Sloan Gibson sent a letter to Congress urging lawmakers lift spending restrictions on employee bonuses that were put in place last year.

Limits on how much the VA could spend on bonuses and other awards to employees were worked into the Comprehensive Addiction and Recovery Act of 2016, which addresses the nationwide opioid epidemic.

Gibson called the restrictions “counter-productive,” “unwarranted” and a hindrance in hiring and retaining high-quality employees. Because of them, he said, employees would see a 30-percent cut in performance-based awards this fiscal year.

“[It] defies logic that Congress should so severely limit employee awards and incentives, for VA alone, at such a pivotal time in our transformation,” Gibson wrote.

After the wait-time scandal in 2014, in which veterans were found to be waiting long periods for treatment, the VA started a concentrated effort to hire more medical staff. But the department has been giving out incentives without confirmation that they were helping to fill gaps in the workforce, the inspectors’ report stated.

As an example, inspectors cited one $51,316 relocation incentive awarded in October 2013 to fill the vacancy of director at the Hudson Valley Health Care System in Montrose, New York.

Hiring officials said the incentive was necessary because of high turnover in the facility and a lack of qualified applicants. But inspectors found the position was not vacant for an extended period of time and the job was not well advertised.

“We found this relocation incentive was based on inaccurate information and was not justified,” the report states. “We determined the position was not hard to fill or subject to leadership turnover.”

In addition, the VA had not created workforce plans in many cases to ensure they could eventually get away from handing out incentives, inspectors found.

As chairman of the House Committee on Veterans’ Affairs, former Rep. Jeff Miller, R-Fla., was one of the VA’s main critics. He’s previously said the department gave out bonuses with “reckless abandon.”

Most of Congress’ complaints have centered on incentives to VA executives.

“Clearly, the judgement of VA leaders is clouded by their continual obsession with cash bonuses, awards and incentives for employees even in the face of ongoing scandals plaguing the agency,” Miller wrote in response to Gibson’s letter.

Of the 1,546 recruitment incentives given out in fiscal 2014, two went to senior executives. They totaled $97,000 and were not properly authorized, inspectors found. Nineteen of 727 relocation incentives were given to executives, and they totaled $728,000 that was not justified.

Of 1,719 total retention incentives given to VA employees, 11 went to executives. Ten of those incentives were given without a workforce plan, meaning $227,000 in retention spending was not supported, according to the report.

Flanz wrote in the report that the VA was working to establish a talent management program for executives that would include workforce management plans, “reducing the risk of long-term reliance on retention incentives.”

Many of the incentives went to hard-to-fill positions such as medical officers, nurses and psychologists. However, in some cases, they were not fully justified, the report states.

Inspectors did credit the VA for decreasing the amount spent through the recruitment, relocation and retention fund. In fiscal 2012, the VA spent $115 million on recruitment, relocation and retention. In fiscal 2015, the department spent $67 million. Those amounts are only a portion of the total amount the VA gave out in performance awards those years.