VA Report: Vets In Private Care Are At Higher Risk For Opioid Addiction

As the Senate today deliberated on an emergency funding bill for the Department of Veterans Affairs’ premier private-health program, a … Continued 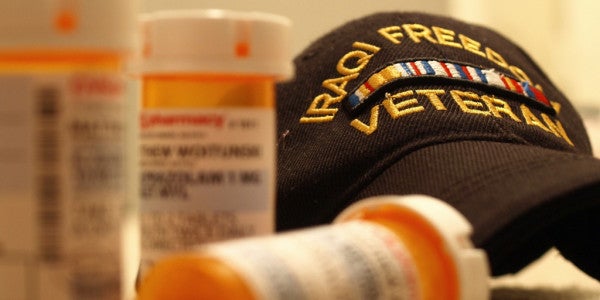 As the Senate today deliberated on an emergency funding bill for the Department of Veterans Affairs’ premier private-health program, a new government report is warning of “a significant risk” of addiction and health complications for veterans who are prescribed opioid prescriptions outside the VA.

The July 31 VA inspector general report found that the department is having communications problems with the private-sector healthcare providers they hire to treat veterans — problems that could lead to overprescription of addictive opioid drugs for pain management, a nationwide trend that’s fueled the U.S.’s recent prescription-addiction and overdose epidemic.

Despite existing safeguards, hundreds or thousands of vets may be getting opioid scrips that the department never knows about. “Patients suffering from chronic pain and mental health illness who receive opioid prescriptions from non-VA clinical settings,” especially those with lower standards than the VA for prescribing the drugs, “may be especially at risk,” the report states.

“There should never be an opioid prescription to a veteran that the VA is not aware of,” Kayda Keleher, associate director of legislative services for the Veterans of Foreign Wars, told Task & Purpose.

At issue is VA’s Choice program, launched in 2014 as a stopgap measure to provide veterans with another avenue of care if they lived too far from a VA medical center or couldn’t be seen by VA within 30 days. Vets who qualify for Choice can be seen by private providers in their communities who have contracted with VA.

The problem, according to the IG report, is that a veteran’s private providers and VA doctors aren’t always talking to each other, and as a result, they may work at cross-purposes. “Non-VA providers do not consistently have access to critical healthcare information on the veterans they are treating,” the report says. And while VA doctors can query state prescription databases to see if patients are getting prescribed drugs outside the VA system, they rarely do, unless they’re prescribing a new controlled drug to a patient.

To make matters worse, if a patient gets a drug prescription from a private provider, he can pay out of pocket to fill it at a private pharmacy rather than the VA’s dispensaries — potentially leaving the VA in the dark about his treatment.

That leaves big cracks for vets to slip through. The report cited the death by overdose of a veteran in his 40s who had been referred to a non-VA provider for back pain. That office prescribed oral opioids, but didn’t alert the VA to those prescriptions — most were filled by non-VA pharmacies. A few days before his death, the veteran’s civilian pain doctor prescribed him morphine tablets, which he filled at the VA pharmacy the next day. He was later found dead with “toxic levels of sertraline, morphine, and gabapentin,” according to the IG’s report.

VA doctors had been treating the patient for suicidal tendencies for four years, with a final appointment just days before his death. A disconnect between the patient’s VA and civilian doctors had put him at mortal risk. “[O]ne can question whether the non-VA provider would have prescribed morphine had he/she been aware of the patient’s other medications, particularly the benzodiazepine, or of the patient’s mental health history, including history of suicide ideation/attempt,” the report said.

The report raises concerns that dealing with an extra track of private care simply overloads the VA’s bureaucracy and isn’t worth the benefit to veterans. But advocates for veterans in Washington cautioned against throwing the baby out with the bathwater.

“It would be wrong to use the opioid epidemic as an excuse to deny veterans healthcare choice,” said Dan Caldwell, policy director of Concerned Veterans for America, which has lobbied to expand veteran access to private care. “The VA is struggling with these problems the same way the private sector is.” Caldwell pointed to a VA hospital in Tomah, Wisconsin, that’s been labeled “Candy Land” for its overprescription of opioid painkillers, which the VA inspector general says contributed the death of at least one vet in its care in 2014.

Statistics provided by the Centers for Disease Control and Prevention, however, suggest that both Choice and VA providers are more responsible prescribers of opioids than the U.S. medical establishment at large. An estimated 20% of pain patients nationwide receive prescription painkillers; that’s significantly higher than the prescription rates for VA patients — 11% — and for Choice doctors — 14%. (In some parts of the U.S., opioid prescription rates for women run higher, as much as 30% — particularly for women experiencing pain from childbirth.)

“VFW is very supportive of Choice,” the VFW’s Keleher told T&P.; “Veterans shouldn’t be traveling more than 40 miles for their care or waiting more than 30 days for appointments.”

Still, she said, figuring out how best way to integrate in-house VA care with the “relatively new” Choice program is “a work in progress.”

One of the insights, Keleher says, is that it’s not a single problem, but a cluster of issues.

“One of the areas where VA consistently needs improvement is IT and infrastructure,” she said. If VA could beef up its cyber capacity and improve its electronic health records, “It would improve a lot of the disconnects we’re seeing on multiple issues like opioids.”

In the meantime, the Veterans Health Administration said in its response to the July 31 report that it will adopt the inspector general’s recommendations to address the dangers of overprescribing opioids among veterans — no small feat in a system where more than half of vets are affected by chronic pain, and two-thirds of vets with opioid prescriptions also have mental-health issues.

“Things like this are going to arise, and we’re going to have to fix them,” Keleher said.