President Donald Trump’s 2018 budget proposes to inject $2.9 billion of new funding into a program that allows veterans to … Continued 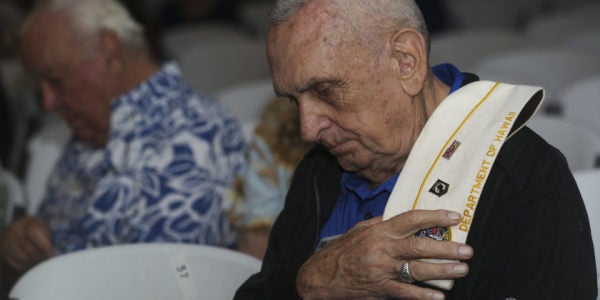 President Donald Trump’s 2018 budget proposes to inject $2.9 billion of new funding into a program that allows veterans to receive care outside the Department of Veterans Affairs, but comes at a cost to VA benefits programs – a move Democrats and veterans organizations criticized Wednesday.

Some of the extra money would go toward an altered version of the Veterans Choice Program, which the VA has committed to changing though Congress has yet to see the plans for improvement.

“This budget appears to lay the foundation for Choice 2.0 and increase non-VA care without a plan that has been given to us,” said Rep. Tim Walz, of Minnesota, the ranking Democrat on the House Committee on Veterans’ Affairs. “There’s a pot of money, but how’s it going to happen?”

VA Secretary David Shulkin has said the redeveloped program would include new eligibility requirements to obtain care outside the VA. The program, which has been criticized as complex and confusing, allows veterans to go to a private sector facility now if they live more than 40 miles away from a VA facility or can’t get an appointment at the VA within 30 days.

Shulkin announced Wednesday to the committee that he would show Congress his plan within the next couple of weeks. He promised “more veterans will get Choice than ever before.”

But spending cuts that the budget describes as “tradeoffs” for the $2.9 billion increase in Choice program funding raised concerns Wednesday among veterans organizations.

Trump’s budget proposes to reinstate a practice to round down veterans’ cost-of-living adjustments and boot some disabled, unemployed veterans from a program that allows them to receive higher disability payments.

Some of the major veterans organizations have spoken repeatedly against expanding too far into the private sector, arguing it could erode resources at the VA. The injection of funding into the Veterans Choice Program, which was created in 2014 as a temporary measure, again incited those worries at the Veterans of Foreign Wars.

“We are very concerned the administration’s request to make the Veterans Choice Program a permanent, mandatory program could lead to a gradual erosion of the VA health care system,” the VFW stated Wednesday in written testimony.

The cut to some veterans’ benefits makes it more concerning, the VFW wrote.

Listed as the biggest offset for Choice program funding is a new restriction on which veterans are eligible for the VA’s Individual Unemployability benefit.

Veterans eligible now for the program have a 60 to 100 percent disability rating through the VA and are unable to secure a job because of their disability. It allows them to receive the highest compensation rate. For 2017, the monthly rate for a veteran living alone is $2,915.

The budget proposes to stop the higher payments once a veteran who is eligible for Social Security payments reaches the minimum age to receive them. Veterans who have already reached that age and receive Social Security would be removed immediately.

If a 60 percent disabled veteran living alone is removed from the Individual Unemployability program, their payments could decrease from the highest rate of $2,915 monthly to $1,062.

Vietnam Veterans of America President John Rowan said in a statement that his organization was alarmed by that part of the proposal, which he said “completely abandons many of the most severely disabled veterans of the Vietnam generation.”

“If a veteran was provided this benefit because of the inability to maintain gainful employment, particularly at a young age, he or she would not have been able to pay for Social Security or put money into a 401K or other retirement savings account,” said Rep. Mark Takano, D-Hawaii. “If you end the [Individual Unemployability] payments for veterans like this, don’t you risk plunging them into poverty?”

Shulkin said the VA was “sensitive to the issue” but had to find savings. The change would save an estimated $3.2 billion in fiscal 2018 and $40.8 billion in 10 years.

“This is a way we think of appropriately utilizing the mandatory funds and looking at where we can make the [Individual Unemployability] program more responsible,” Shulkin said.

Chenelly said he has a meeting with Shulkin next week, when he plans to bring up his group's concerns about the cuts. While the VA was developing the budget, they ran ideas for budget cuts past major veterans organizations. Trimming the Individual Unemployability benefit didn't come up, Chenelly said.

“I know what a budget is, it's just a framework of ideas. I'm hopeful we're going to have plenty of opportunities to air our concerns,” he said. “I don't think it's fair to be asking our senior citizens to sacrifice more.”

Concerned Veterans of America, a conservative-leaning organization backed by Charles and David Koch, had opposite criticisms. Dan Caldwell, CVA's policy director, said the administration was not aggressive enough in seeking out cuts. The group has previously advocated for broad expansion of veterans’ care into the private sector.

“The massive VA investment made by President [Barack] Obama did not bring better outcomes for veterans – it only proved that throwing money at the problems is not the answer,” Caldwell said. “Congress should not accept the new VA budget proposal as it is currently written. By aggressively seeking out savings, Congress can help the VA better use taxpayer dollars and better serve veterans.”

Rep. Phil Roe, R-Tenn., chairman of the House Committee on Veterans’ Affairs, warned against wasteful spending and said the VA budget needs a “hard look.” Throwing money at a problem rarely makes it go away and, when it does, the solution is often temporary,” Roe said. “It is time for the VA to take a hard look at how resources are allocated and make some tough calls about how to best serve our veterans and their families in a budget environment that is not infinite.”

Caps student veterans’ Post-9/11 GI Bill benefits for flight training. Flight programs tend to be more expensive than other courses of study, the budget states. It proposes capping benefits for flight training at the maximum the VA will provide to students at private schools, which is about $21,000 each year. The cap would save $42 million for the VA for fiscal 2018, which the agency plans to use as part of the offset for Choice program funding.

Reduces the budget for medical research by more than $30 million next year. Funding will be focused into several priorities, such as research into opioid addiction, illnesses in Gulf War veterans and veteran suicide. A VA official estimated the cut would lead to the discontinuation of about 24 research projects. Trump’s budget calls for cuts to medical research across other agencies, too, including the National Institutes of Health, National Cancer Institute and U.S. Centers for Disease Control and Prevention.

Provides funding for the Veterans Benefits Administration to hire for 7,000 new full-time positions. The Government Accountability Office reported earlier this year the VBA would need a “hiring surge” at the beginning of fiscal 2018 to keep up with veterans’ pending claims for benefits.

Reduces the budget for information technology from $4.3 billion to $4.1 billion. One VA official said it included enough funding to either improve the VA’s electronic health record or to purchase an off-the-shelf solution to replace the agency’s old, patchwork IT system, called VistA. In a report earlier this year, the Government Accountability Office criticized the VA for putting too much money into VistA and encouraged them to buy a commercial system. Shulkin said he’d announce a decision by July 1.

Sets aside $505 million for gender-specific health care, which the VA said is a 7 percent jump from fiscal 2017. Iraq and Afghanistan Veterans of America, which has been advocating this year for increased VA services for women veterans, still criticized it as a “ridiculously small commitment.”

Does not include increased funding to treat veterans with other-than-honorable discharges, who are ineligible to receive VA care. Shulkin committed in March to providing at least some mental health care services to those veterans, whose mental health conditions are often factors in their military discharge. When questioned by Rep. Mike Coffman, R-Colo., and Rep. Beto O’Rourke, D-Texas, Shulkin said he would offer the services, anyway.