‘Eat The Apple’ Is The Belligerent, Unflinchingly Honest Iraq War Memoir We Needed

Editor’s note: With self-lacerating wit, Eat The Apple is a new Iraq war memoir that spares nothing and no one,... 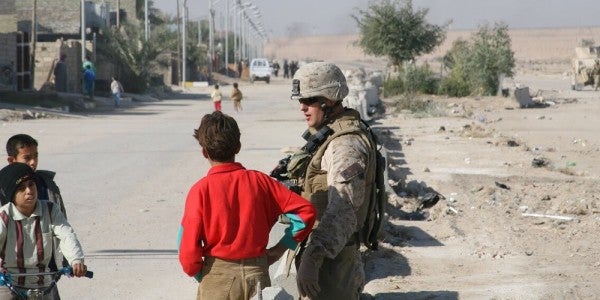 Editor’s note: With self-lacerating wit, Eat The Apple is a new Iraq war memoir that spares nothing and no one, least of all its author, Marine Corps infantry veteran Matt Young.

“You’ve chosen the United States Marine Corps infantry based on one thing,” Young says to himself in the memoir, which published Feb. 27, 2018. “You got drunk last night and crashed your car into a fire hydrant sometime in the early morning and think — because your idea of masculinity is severely twisted and damaged by the male figures in your life and the media with which you surround yourself — that the only way to change is the self-flagellation achieved by signing up for war.”

The memoir takes its name from a common Marine saying: Eat the apple, fuck the Corps, which Young explains as; “Take your enlistment, your four years, or whatever you’re doing in your time there, and really embrace it and digest it, then when it’s done, toss it and move on.”

Young draws from three tours to Iraq between 2005 and 2009 to paint a picture of life in the Marine Corps infantry. It’s dark, morally ambiguous, fraught with violence, self-conscious masculinity, and punctuated by moments of introspection and hilarity.

Matt Young, Marine veteran and author of “Eat The Apple.”

Related: He Was Hit In The Face By An RPG. Only Returning To War Made Him Whole »

In Eat The Apple, none of our assumptions about why young Americans sign up to serve during wartime, what that service entails, and whether anything will ultimately be accomplished as a result of it, are safe.

“It’s easier to fit that one-size fits all narrative: Patriotism, America, freedom, defending the Constitution, all that stuff,” than have an honest discussion about why we go to war, Young told Task & Purpose.

In this excerpt from Eat The Apple, Young returns from his first deployment and struggles to live up to the image of the Marine “home from the war” that he thinks is expected of him.

How to Feel Ashamed for Things You Never Did

When the boy returns from his first deployment in August 2006, his family is waiting at Camp San Mateo. The company rolls in on charter buses from March Air Force Base in the evening. They exit the buses to a parade deck full of screaming families. Some of his salts who got out before or during the deployment are outside the armory throwing beers over the fence as Marines turn in rifles and heavy weapon systems.

The camp guard gives up.

He finds his family wandering the basketball court at the center of the barracks calling his name. Grandparents, aunt, fiancée—he wants so badly to be happy when he sees them.

The family has rooms at a hotel in San Clemente, California, just outside Pendleton. The boy has leave for ninety-six hours. Four days. The thought of four days with them quickens his heart and sweat slicks his palms. In the car he places his hand to the smooth, cool flesh of his fiancée’s thigh, and the muscle beneath her skin tightens for a lightning strike of a second. From the front seat, the grandfather talks about the drive from Mount Shasta to Camp Pendleton. The grandfather talks about driving The Grapevine and the great distances of California and how no one else makes his mochas the way he likes them aside from the chippie at the coffee hut back home. The boy listens, stares at the city lights, and marvels at the lack of tangled wires, at the people walking around after ten at night, at the smiles, at the clean roads.

In the hotel room he drinks beer and liquor and smokes cigarettes. He is quiet at first—the flight from Iraq to Kuwait to California a shock to his system, his synapses are out of whack. He’s had a drink or two in the last eight months, only a swig of contraband whiskey here or there. This is something else altogether. Because of the drink he’s tossing down his gullet, later on he won’t remember how he began talking about the deployment.

The boy has not lied to them, yet. He tells them stories about Keene hitting himself and trying to talk after their Humvee was blown sky-high by a culvert bomb, about Charlie falling down a dune while taking sniper fire during lieutenant mandated forced trash pickup, about detaining a twelve-year old boy during a raid, about being ambushed in the back of a Humvee and laughing.

In the silent spaces between stories, the boy’s family filters from the room, excusing themselves to sleep until it’s only the boy, the aunt, and the fiancée. The silences hang between them. He sips his bottled beer and moves his eyes all over the room, skipping over the women’s faces, which to him look drenched in a sheen of expectation.

What the boy hasn’t realized in that moment, what he’ll come to understand later, is that the aunt and fiancée are not expecting anything. Instead they’re pleading, begging, and screaming for him to shut up, to not crack another beer, to sleep. If he could erase the drunk from his brain he’d notice the facial torsions, widened eyes, crimped mouths. But instead, the warped faces look to him confused and questioning, wondering where the real story is. Like the women are waiting for an answer as to why he has come home this way, nervous and quiet and dispassionate.

So he tells a lie. He tells them about a made-up village and a fantasy house within the village and imagined insurgents within the fantasy house and fictional grenades and bullets used to kill those invented insurgents defending the fantasy house. He tries thinking of realistic films, secondhand stories from his salts, books he’s read, anything to tell convincing details of bullet holes and blood spatter and viscera. This feels, to him, like an explanation of individual experience, this black-and-white infallible story of good versus evil. A story where he doesn’t feel as though he has to explain his actions. A story where he gets to feel, for once, like a hero.

In the morning, the boy’s head aches and alcohol sweat coats his skin like wax. There’s a tough, meaty, sick feeling in the ethereal place beyond his stomach, between soul and body, floating around inside—a shattered figurative pelvic bone where he birthed his lie into the world.

The next day in the car on the way to breakfast no one makes eye contact with him. Or maybe it’s he that cannot make eye contact with them. Or maybe he’s imagining all that. He wonders what he said verbatim. He wonders if he fabricated anything other than his perfect story. Maybe he did. Maybe he didn’t. The boy thinks maybe he should ask what he talked about. He wonders if his family would recount the story he told. Will they remember? he thinks. Maybe they’ll forget about it, he thinks. They probably don’t remember, he thinks. I should tell the truth and apologize, he thinks. I’ll just say, Sorry for last night, he thinks. The boy thinks, They’ll understand; they are my family; of course they will understand.

He opens his mouth to speak.

The grandfather pulls out of the hotel parking lot in the path of a passenger bus and the boy has a very real, not fictitious anxiety attack. The car shrinks, his ears buzz, his skin prickles. Suspicious roadside trash puckers his asshole, his fingernails sheathe into his palms at the sight of a woman in a hijab. The boy thinks the aunt must notice his reactions because she eyeballs him and tries to make a joke about the grandfather’s driving. The boy cannot manage a laugh.

At the restaurant, the family eats, and begins again to talk— family news and gossip, jobs, the fiancée talks about college. Now the boy thinks maybe they never stopped talking in the first place. He stuffs his mouth with huevos rancheros and lets sticky ocean brine into his nostrils for his first full breath in eight months.

The lie becomes a scratch on the roof of the boy’s mouth he can’t stop tonguing—passively nagging and pulling, closing and reopening, always there. Later, he’ll fashion the lie into a story to tell friends, acquaintances, other Marines. After a time, he’s ashamed not to tell the story, and that thick sick feeling, in the place beyond his guts in the ether from where the story emerged, becomes a dull throb, a bit of pressure next to his spine or behind his eyes or inside his rib cage, but doesn’t disappear, because the boy hasn’t found a way for the story to end.